Philadelphia Eagles quarterback Carson Wentz scrambles out of the pocket against the Dallas Cowboys during their NFL game on December 9 at AT&T Stadium in Arlington, Texas. Photo by Ian Halperin/UPI | License Photo

The Philadelphia Eagles made it official Saturday, ruling out quarterback Carson Wentz for Sunday's matchup at the Los Angeles Rams.

The move was expected after Wentz was diagnosed with a fracture in his back and had been downgraded from questionable to doubtful on Friday.

Super Bowl MVP Nick Foles will get the start Sunday for the Eagles (6-7), who are among three teams that trail Minnesota (6-6-1) for the sixth and final playoff spot in the NFC.

"He has a stress injury evolved over time and requires no surgery," Philadelphia coach Doug Pederson told reporters Friday. "I'm not asking or answering any more questions about it. We're playing the Rams in two days if you guys haven't figured this out."

Wentz will not need surgery for the injury. He was listed on the injury report with back soreness during Weeks 7 and 8, but Pederson on Wednesday said the 25-year-old did not add to the issue during Sunday's 29-23 overtime loss to the Dallas Cowboys.

Drafted No. 2 overall by Philadelphia in the 2016 NFL Draft, Wentz was considered the front-runner for league MVP honors before suffered a torn ACL and LCL against the Rams a year ago, throwing for 33 touchdowns and seven interceptions.

RELATED Fantasy Football Who's In, Who's Out: Week 15 NFL injury report

A former third-round pick of the Eagles, Foles initially struggled when taking over for Wentz a year ago, but he compiled a passer rating of at least 100.1 in all three postseason victories.

Foles threw for 352 yards and three scores in a 38-7 rout of Minnesota in the NFC Championship Game. He followed that up by guiding Philadelphia to a 41-33 victory over the New England Patriots in Super Bowl LII, completing 28 of 43 passes for 373 yards and three touchdowns.

The 29-year-old Foles also provided one of the highlights of the victory when he caught a touchdown pass right before halftime on the famous "Philly Special" play. 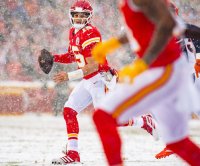