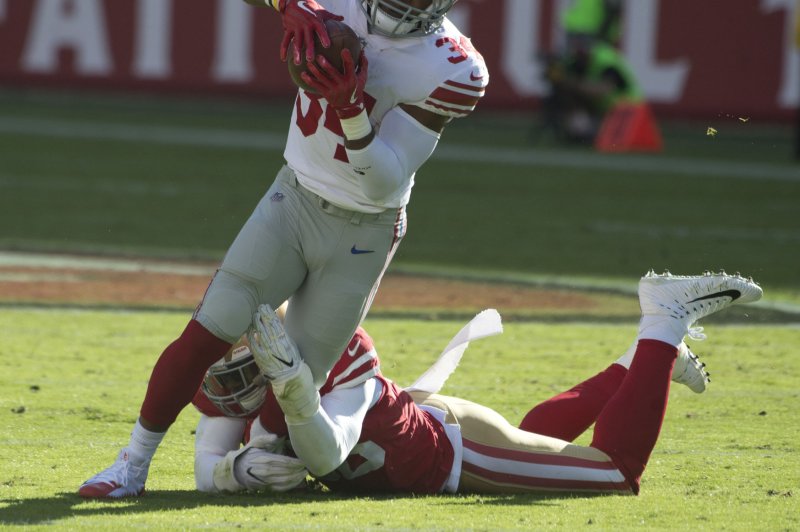 A little over a week after the San Francisco 49ers released linebacker Reuben Foster due to an arrest for domestic abuse, his former girlfriend told her side of the story.

During an appearance on ABC's "Good Morning America" on Thursday, Elissa Ennis said Foster slapped her and pushed her during an incident in Tampa, Florida. In the interview, Ennis said Foster abused her three times and also accused the 49ers of interfering with the police investigation in the latest incident.

The most recent incident took place on Nov. 24 before the 49ers faced the Buccaneers. Foster was charged with one count of first-degree misdemeanor domestic violence.

The 49ers cut Foster on Nov. 25 before their 27-9 loss at Tampa Bay and he was claimed off waivers by the Washington Redskins two days later. Foster is currently on the NFL's Commissioner Exempt list, meaning he cannot play or practice.

During the interview, Ennis said she was shocked when Foster was picked up by Washington, saying: "I can't believe somebody picked him up so soon."

During the segment, Ennis also questioned the 49ers' role in the police investigation and said she has photographic evidence of San Francisco officials coming up to the hotel room after Ennis told a 911 dispatcher Foster slapped her and took her phone.

"Even when I called the police, the 49ers came up there," Ennis said. "I have pictures of the 49ers coming up there, trying to talk to the police and say I'm the same ex-girlfriend that sit up there and lied."

Hours after the interview aired, the 49ers released a statement to say they cooperated with law enforcement.

"The 49ers fully cooperated with authorities, assisted in locating Mr. Foster and in no way impeded their investigation," the statement said.

Foster was suspended by the NFL for two games at the start of the season following an arrest for misdemeanor marijuana possession in January in Tuscaloosa, Ala. During a Feb. 11 arrest he was charged with possession of a loaded rifle, which was discovered on his bathroom floor. He pleaded no contest to a misdemeanor weapons charge and was ordered to perform 232 hours of community service.

One of the original red flags on Foster occurred during the NFL's Draft Combine in 2017. To that point, the All-American Alabama star was rated as the No. 1 inside linebacker and was listed as high as No. 7 overall by many, including NFLDraftScout.com.

He was asked to leave the combine after becoming loud and obnoxious with the medical staff while awaiting a drug test. It turned out he submitted a diluted urine sample and post-combine reports indicated he flunked the test. Due to the combination of his actions and the drug test, he was pushed down many draft lists -- and off some.

On the day of the draft, Foster slipped through the first 30 picks. Later investigation revealed many teams were not only concerned about his actions and drug issue at the combine, but that his shoulder was worse than advertised following a surgery that was not openly announced.

However, on draft day, the 49ers traded with the Seahawks, acquiring Seattle's pick at No. 31 overall to select Foster. In exchange, the Seahawks netted the 34th pick in the second round along with the Niners' pick at No. 111 in the fourth.

NFL // 16 hours ago
Browns DE Myles Garrett cited for failing to control Porsche before crash
Sept. 29 (UPI) -- All-Pro defensive end Myles Garrett was cited to "failure to control" his Porsche and received a court summons for next month after he flipped the car in a single-car crash, the Ohio State Highway Patrol said Thursday.

NFL // 18 hours ago
NFL looks into filming of Dolphins' practice in Cincinnati
Sept. 29 (UPI) -- NFL security is looking into an issue that surfaced in Cincinnati, when someone filmed a closed Miami Dolphins practice and posted footage from it on social media, a league source told UPI on Thursday.

NFL looks into filming of Dolphins' practice in Cincinnati