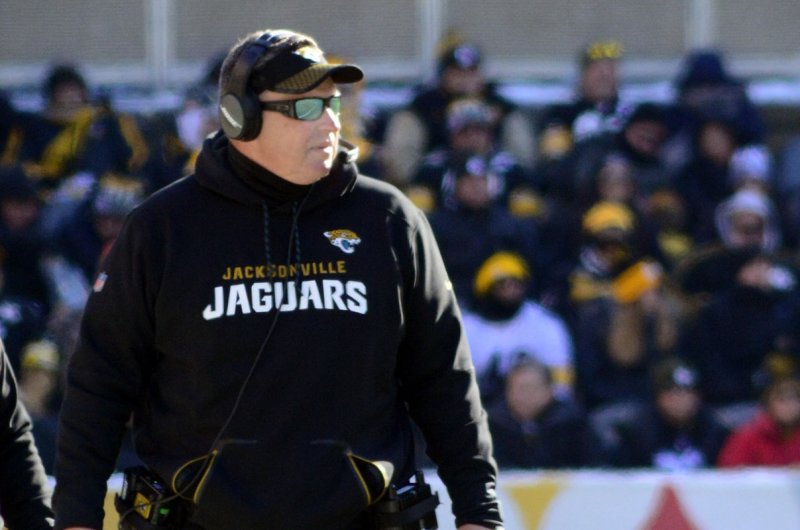 Jacksonville Jaguars head coach Doug Marrone watches on the sideline in the first quarter of the AFC Divisional Round against the Pittsburgh Steelers on January 14, 2018 at Heinz Field in Pittsburgh. Photo by Archie Carpenter/UPI | License Photo

Raise your hand if you saw this one coming.

An Indianapolis team that had won five consecutive games with a quarterback who had thrown for at least three touchdown passes in eight consecutive games, going against Jacksonville, which was on a seven-game losing streak and who had fired its offensive coordinator and benched its starting quarterback earlier in the week.

Anyone who predicted a 6-0 Jacksonville win Sunday at TIAA Bank Field, either really knows football or should go buy a lottery ticket.

Andrew Luck came into this game as one of the hottest quarterbacks in the league, having just been named the NFL's Offensive Player of the Month. Luck was on pace for one of his best seasons ever, having already surpassed the 3,000-yard mark in just 11 games this season. After a slow start in which the Colts won just one of their first six games, he led the team to five straight wins since then, averaging 34.6 points a game in that span.

Jacksonville (4-8) was just the opposite with the seven losses in a row, allowing 26.7 points a game in those defeats. But Jacksonville didn't play like a 3-8 team and Indianapolis (6-6) was nowhere near the team that had turned things around and was in the hunt for a wild-card spot in the playoffs.

Those hopes may be gone however, especially with Baltimore winning again and moving a full two games ahead of the Colts for the sixth and final spot in the AFC playoff picture.

It's hard to explain how the Jaguars were able to post their first shutout win at home since 2006 and derail an offense that was operating so smoothly and efficiently. Luck tried to explain it afterwards.

"They played better than us, there's not much more to say," the Colts quarterback said. "I know I don't feel I held up my end of the bargain. As the orchestrator of the offense out there on the field, I'm disappointed in myself. I didn't get the ball to the open guy enough.

"I didn't feel very sharp. I didn't feel I was putting the ball in the right places to give the guys a chance to catch them, but again, give credit to their coverage. I think all the guys in the locker room right now feel that we didn't hold up our end of the bargain as players."

For Jacksonville, the win was sorely needed for a team that had started the season with such high expectations and had set a goal of a Super Bowl appearance in their horizon. While Jacksonville had lost seven consecutive games, they were on the fringe of a victory in their last four games, losing by 3, 4, 3 and 6 points. They were in possession of the ball with the possibility of going in for the winning touchdown in the fourth quarter of each of those games.

Against Indianapolis, a team that had scored 29 points on them in the first half of a 29-26 win just three weeks ago, the Jaguars had to find a way to survive Luck putting together a 21st fourth-quarter/overtime winning drive in his career. Luck marched the Colts 60 yards in seven plays to the Jaguars' 25-yard line. But his final completion was a four-yard completion to tight end Erik Swoope, who was upended by Jalen Ramsey before he could get out of bounds. With no timeouts left, the clock ran out on the Colts and likely their playoff chances for 2018.

Jaguars head coach Doug Marrone lauded his team for playing through the controversy that surrounded the team this week.

"Those guys come to work. They understand that they're professionals," Marrone said about his team. "Like I said before, and I said it in the locker room after the game, I give them a lot of credit. Obviously, we know there's a lot going on on the outside, obviously there's been some changes, changes in the lineup, changes staff-wise. Those things are going on, and then trying to keep everyone focused and keep everyone playing together is really a credit to the guys in the locker room."

Kessler was average in his first game replacing Blake Bortles as the starting quarterback. It was Kessler's first start since he started eight games for the Cleveland Browns in 2016, all of which ended up as losses. He finished 18-of-24 passing but for just 150 yards. He was sacked three times and finished with a 90.6 rating.

"It wasn't pretty but man it feels good," Kessler said. "It's something as a quarterback and as a kid you dream of winning an NFL game. There's no doubt about it that I have to do better though, and push the ball downfield a little bit more and take some of those shots. When your defense is playing so well you don't want to force things and make stupid turnovers to put them in a bad spot."

While he couldn't lead the Jaguars into the end zone, Kessler was able to direct two drives of 48 and 49 drives that resulted in field goals. Josh Lambo connected from 30 yards out in the second quarter and from 37 yards away in the fourth quarter to account for the game's only scores.

Indianapolis had its chances to get in the end zone. The Colts failed to convert on a 4th-and-goal from the 1-yard line in the second quarter, and also had drives end in Jacksonville territory at the 19 (on downs), the 31 (fumble), 41 (interception) and the last series of the game. On the series in which the Colts failed to convert from the 1-yard line, they actually scored three points when Adam Vinateri converted a field goal from 29 yards out, but the Colts took the points off the board when Jacksonville was called for a personal foul penalty on the play, giving Indianapolis a first-and-goal at the 5-yard line. The move backfired when Jacksonville held the Colts to four yards in four plays.

"It was a tough loss. We knew we were going to get [Jacksonville's] best effort," Colts head coach Frank Reich said. "We knew we were going against a top-5 defense. We played hard, we just didn't execute the way we needed to. We just needed to execute a little bit better and not have the self-inflicted wounds. Give Jacksonville a lot of credit, that's a good defense and they got the best of us today."

Luck finished with 248 passing yards but was intercepted once and sacked three times. He had a streak of 34 consecutive games in which he had thrown a touchdown pass come to an end along with his eight-game mark of three TDs or more.

"I know I can be sharper, I know I need to be sharper," Luck said. "I'm discouraged today but in a sense I'm also encouraged to get back to work and improve on things starting tomorrow."