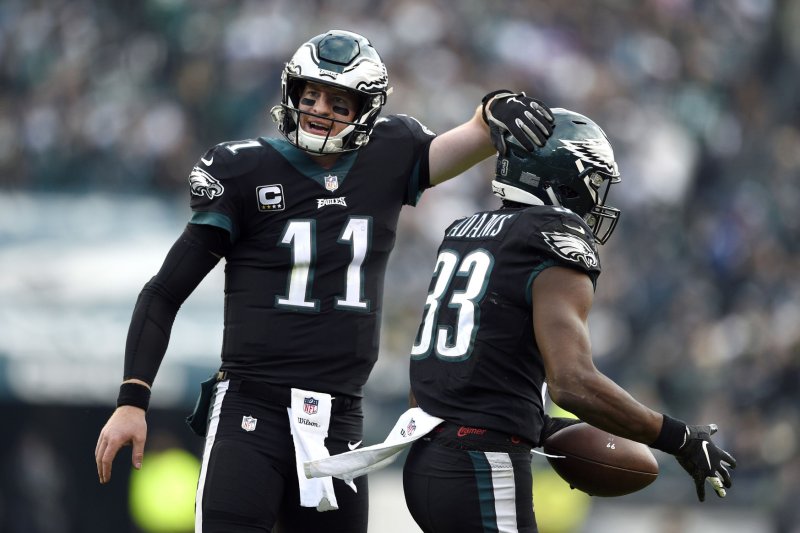 Philadelphia Eagles quarterback Carson Wentz (11) congratulates running back Josh Adams (33) after scoring a touchdown during the second half against the New York Giants on November 25, 2018 at Lincoln Financial Field in Philadelphia. Photo by Derik Hamilton/UPI | License Photo

Consecutive defeats to the Houston Texans and Dallas Cowboys cost the Washington Redskins a chance to seize control of the NFC East race.

Those losses also helped the Philadelphia Eagles climb back in the race.

Only one game separates the Redskins from the Eagles in the suddenly tight NFC East heading into a Monday night showdown in Philadelphia.

After getting a 16-3 win at Tampa Bay in Week 10, Washington was 6-3 but there are questions if this will be another slow fade and questions will be brought up about the direction of the team in the offseason.

"Whenever you lose, it's always tough. Losing in the division is even tougher," Redskins quarterback Colt McCoy said. "So there is a lot to clean up there, a lot to learn and moving forward to the Eagles now. We've watched that [Dallas] tape, kind of put it to bed and thankful to have a little bit of extra time to prepare for these guys, a couple extra days. I could use it all."

Even with McCoy being in the organization since 2014, the devastating injury to quarterback Alex Smith (broken leg) left only a few days for McCoy to get ready for Dallas. He had taken only a token number of snaps in a meaningful game since 2014 when he had the chance to start a few games in Jay Gruden's first year as head coach.

The hope is a full week of practice after a mini-bye of sorts gives McCoy time to prepare for the Eagles. The Redskins will do immense damage to Philadelphia's playoff hopes with a win. They could do the same to their own with a third straight loss.

"I think there should be a sense of urgency without a doubt, where we are in the season, what our record is. We're tied for first, Dallas is right there, Philly is right there," Gruden said. "Anytime you can go on the road and get a key victory is very, very critical. It is also important for our confidence and our psyche down the stretch.

"I don't think anybody has lost any confidence despite the injuries that we've had, especially to our quarterback. I think we all have faith in Colt but to go out there and to get a big win against the defending Super Bowl champs would do a lot of good for a lot of people."

Meanwhile, it appears Philadelphia could be gearing up for a big run. The defending Super Bowl champions lost five of seven games, culminating in a 48-7 loss at New Orleans two weeks ago. Things appeared bleak last week as the Eagles faced deficits of 12-0 and 19-3 but wound up rallying for a 25-22 win over the New York Giants.

"This was a big game for us," Eagles quarterback Carson Wentz said. "Obviously in terms of the division standings and all that fun stuff, but really mentally to show the resilience that we did. To get down early like we did, then to battle back, just really builds a lot of confidence -- to come from behind and get it done I think will speak volumes about our confidence going forward."

Jake Elliott kicked a 43-yard field goal with 22 seconds left and undrafted rookie running back Josh Adams scored on a 1-yard touchdown run in the fourth quarter. Zach Ertz caught a 15-yard touchdown before halftime and finished with seven receptions for 91 yards.

Ertz is positioning himself for one of the best seasons of any tight end in league history.

Ertz leads the Eagles this season in catches with 84, yards with 895 and touchdowns with six, all of which have come in the red zone. His catches and yardage totals are both career highs. He is on pace for 122 catches, 1,301 yards and eight scores.

Ertz has already broken the Eagles' record for most receptions in a season by a tight end that was set by Keith Jackson with 81 in 1988.

"He's a big guy and he's got excellent play strength, a really good catch radius and strong hands," Eagles offensive coordinator Mike Groh said. "So he can catch it away from his body, and even in those tight spaces like you talk about, he's able to create a little bit more space for himself by using his body and his length."

Washington is 5-2 in the last seven meetings and hosts Philadelphia in Week 17. After Monday, the Redskins host the Giants before visiting Tennessee and Jacksonville, while Philadelphia visits Dallas, the Los Angeles Rams and hosts Houston.