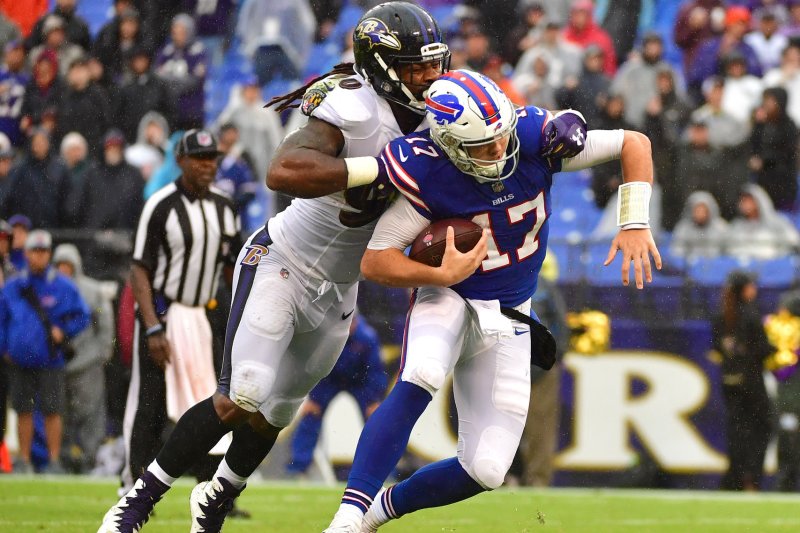 Bills quarterback Josh Allen wasn't interested in exchanging barbs with one of the NFL's foremost trash talkers, Jalen Ramsey of the Jacksonville Jaguars.

No, Allen was more than happy to just pump his fists and get the crowd at New Era Field fired up before, during, and then after Buffalo's 24-21 victory over Ramsey and the Jaguars on Sunday.

"I just want to win football games," Allen said after a game in which he passed for 160 yards, rushed for 99, ran for one score, threw for another, and did not commit a turnover or take a sack.

"There was a lot of trash talking before and after, but ultimately my job is to go out there and help this team win, and I did a good enough job of that tonight with the help of my team. He's one of the best corners in the league ... to come out and get a 'W' and score 24 points felt good."

RELATED On the line: Changes could be coming for Atlanta Falcons

The story has been well-documented, Ramsey spouting off during an interview with GQ magazine back in the summer about all the NFL quarterbacks he doesn't think are any good, including Allen who he called "trash" and a "stupid pick" by the Bills.

Allen said very little about it. His response was to throw a 32-yard completion to Kelvin Benjamin with Ramsey in coverage, a net gain of 47 after Ramsey was flagged for a facemask penalty. A few minutes after the Bills took a 7-0 lead to cap that possession, Allen unleashed his powerful arm and fired a 75-yard laser of a touchdown pass to Robert Foster for a 14-0 first-quarter lead.

That was the longest TD pass by a rookie in Bills history, and his 99 rushing yards were also a new rookie quarterback record for Buffalo.

After the Jaguars rallied to pull even, Allen needed just three plays and two Jaguars penalties totaling 30 yards to move the Bills 68 yards to the go-ahead score, his 14-yard TD scamper up the middle on a designed quarterback keeper. On the play, Allen read linebacker Myles Jack perfectly, and when Jack peeled off into coverage to Allen's right, the middle was wide open and that was Allen's cue to go, which he did.

Finally, with the Bills trying to put the game away, Allen flipped the field with a huge 45-yard scramble. Ultimately, the Bills pinned Jacksonville deep with a punt, and Jordan Poyer quickly intercepted a Blake Bortles pass to set up what turned out to be the game-winning field goal by Stephen Hauschka.

"They went split-safety quite a bit," Allen said in explaining how he was able to break several runs. "And their Mike was relating to three, especially when we did go empty so that opens up a lot of lanes for a quarterback to run. There were a few plays that were broken, and we decided to make a play and there was a lane. The quarterback draw down on the goal line in the red zone was a great call by (offensive coordinator) Brian Daboll and we executed it well."

This was a nice step forward for Allen, who had missed the previous four games with a strained elbow. In his return, he showed no ill effects in terms of velocity and willingness to make certain throws as evidenced by the pass to Foster.

"He's still young, so again, let's manage expectations," coach Sean McDermott said. "It was a good start for him. These (final) six games ... get him back on the field and grow and see different defenses."

--WR Robert Foster caught two passes for 94 yards including a 75-yard reception for a TD in the first quarter, the first score of his NFL career.

--RB LeSean McCoy struggled again as he carried 17 times for just 46 yards and caught only one pass for seven yards.

--RG John Miller suffered an abdomen injury and sat out the second half of the game. He was replaced by Ryan Groy.

--QB Derek Anderson was inactive because he remains in concussion protocol for what has now been a month.