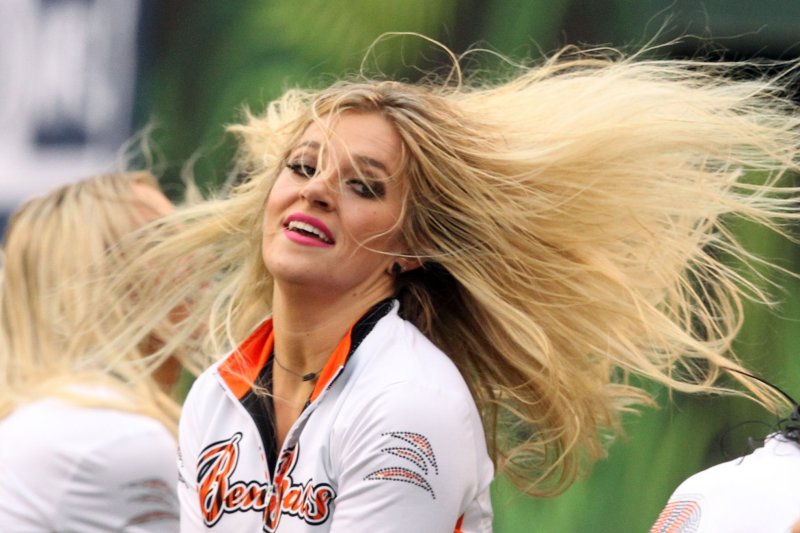 Cincinnati Bengals cheerleaders cheer for their team against the Pittsburgh Steelers during the first half of play on October 14 at Paul Brown Stadium in Cincinnati. Photo by John Sommers II/UPI | License Photo

The Cincinnati Bengals have dropped two games in a row but get a chance to end their slide against a familiar opponent that they have thoroughly dominated over the past few seasons.

After falling back to the pack with four losses in their last five games, the Bengals will look to get back on track when they host the Cleveland Browns in an AFC North matchup on Sunday afternoon.

Cincinnati, among five teams sitting at 5-5 in the AFC, has won seven consecutive games over its intrastate rivals. And it hasn't been much of a rivalry during that span -- the Bengals have won each game by an average margin of more than 21 points and the closest game in that span was a 23-10 victory in December 2016.

"It's like the first game of the season," Cincinnati wide receiver John Ross said of the race for the sixth playoff slot. "We've got to continue to prove ourselves and go out and win that game. Win the next game. Because every game from here on out is very pivotal for where we want to be. It's very serious how serious we take it and how hard we work to get to exactly where we want to be."

RELATED Cowboys WR Gallup in line to play vs. Redskins

The Browns (3-6-1) have already won more games than their previous two seasons combined but they will be trying to end more than just a streak of seven straight losses to the Bengals.

Cleveland, which last beat Cincinnati in November 2014, has dropped 25 consecutive games away from home and a loss Sunday would tie the Browns with the Detroit Lions (2007-10) for the longest road losing streak in NFL history.

There also is a notable subplot to the contest. Hue Jackson, who was fired as the head coach of the Browns on Oct. 29, is now on Marvin Lewis' staff with Cincinnati, hired as a defensive assistant on Nov. 13.

Jackson was the offensive coordinator in 2014 and 2015 with the Bengals, which served as a springboard to getting the top job with Cleveland. Now working on the defensive side of the ball, Jackson could provide insights into the Browns' offensive schemes.

"I think Hue understands their personnel," Lewis acknowledged. "He understands part of the way, particularly defensively, how they were putting the plan together. His involvement that way is that he can be an asset to us in some ways."

However, the Browns downplayed any impact Jackson will have on the outcome, insisting the game will be settled by how well they play.

Added wide receiver Rashard Higgins: "It's not what Hue Jackson knows, it's about how we go out and do our thing. We're not worried about it. We're just going to go out and play."

The Bengals are holding out hope that wide receiver A.J. Green will return to the lineup after missing two games with a toe injury. Andy Dalton was 31 of 56 for 364 yards with three touchdowns and two interceptions in the past two games without Green, who could practice later in the week, Lewis said.

"We just have to find a way," Cincinnati wideout Tyler Boyd said. "It would make us a lot better. He's the best player on our team, and his help out there relieves a lot of guys. I feel like we just need to make more plays out there."

Browns quarterback Baker Mayfield likely will lean on fellow rookie Nick Chubb, who rumbled for 176 yards and a touchdown in a 28-16 upset over Atlanta on Nov. 11 before the team's bye week.

"He's a strong runner," Williams said. "He protects the football very well. The things that you have to be able to do if you are going to take a step above everybody else or be looked at as being one of the up-and-comers is his overall vision. You can't coach that."