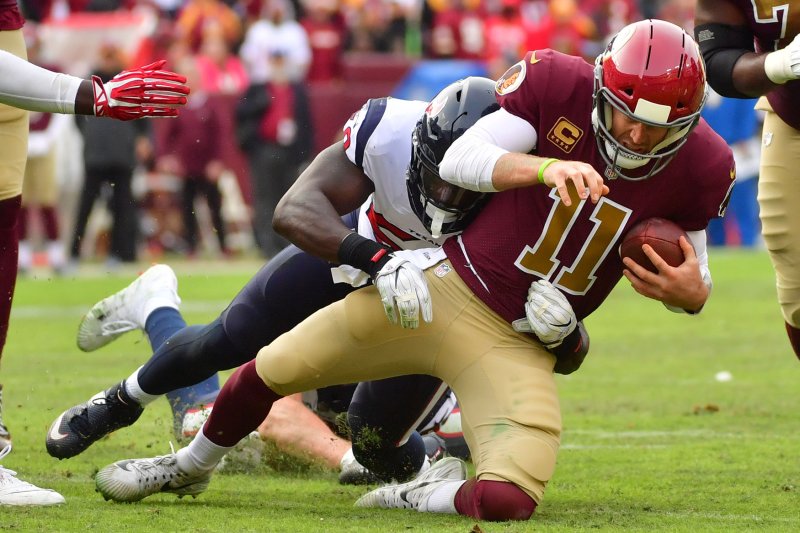 Washington Redskins quarterback Alex Smith's career is not thought to be in jeopardy after he sustained a broken tibia and fibula, according to a published report Monday.

NFL Network's Ian Rapoport reported the news on Smith after he was injured on a sack in the third quarter of Sunday's 23-21 loss to the Houston Texans.

Colt McCoy entered the game in place of the 34-year-old Smith, who was injured 33 years to the day of former Redskins quarterback Joe Theismann. Theismann, ironically, was in attendance at Sunday's game.

Washington (6-4) brought in EJ Manuel, T.J. Yates, Mark Sanchez, Kellen Clemens and Josh Johnson for a workout on Monday, per ESPN. The Redskins will face a quick turnaround before Thursday's Thanksgiving Day showdown with the Dallas Cowboys (5-5).

Washington traded a third-round pick and cornerback Kendall Fuller to the Kansas City Chiefs for Smith in January. The Redskins signed Smith to a four-year extension worth up to $94 million, with $71 million guaranteed.

Smith has thrown for 2,180 yards and 10 touchdown passes against five interceptions this season.

"I know it was very painful for [Smith] and heartbreaking for a lot of people," Redskins head coach Jay Gruden said on Sunday. "He's a great guy and a hard worker and one of the key leaders on this football team. These things happen in pro football unfortunately. You just hate to see them happen to a guy like Alex. But knowing the type of guy he is, I think he'll bounce back."