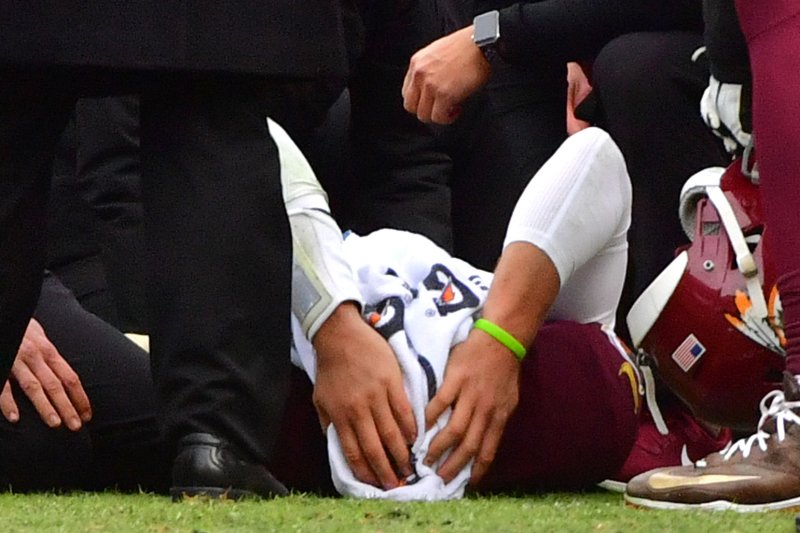 Washington Redskins quarterback Alex Smith (11) is tended to after after being injured in the third quarter against the Houston Texans on November 18 at FedEx Field in Landover, Md. Photo by Kevin Dietsch/UPI | License Photo

Few, if any, NFL quarterbacks faced the myriad of challenges confronted by Alexander Douglas Smith, who was under a shroud of controversy even before he entered the league at the very highest level in 2005 as the first overall pick in the draft by the San Francisco 49ers.

Now, after overcoming multiple issues to achieve success with three organizations, Smith is facing yet another challenge as he recovers in a Washington hospital following surgery to repair a broken fibula and tibia, the result of a play so gruesome Sunday that even national television had the decency not to replay it more than once.

It happened while he was dropping back to pass for the Washington Redskins and was overrun by Houston Texans defenders J.J. Watt and Kareem Jackson. It was immediately obvious that the 34-year-old quarterback was injured in a horrific manner reminiscent of the one infamously incurred by former Redskins quarterback Joe Theismann exactly 33 years ago to the day.

"The memory is vivid," said Theismann, who was at Sunday's game and relived his own horror. "It's like all the senses, all of the people, all of the memories, everything that happened in that instant all comes back to me. If there is a positive aspect, it's that so much of medicine has changed."

Redskins head coach Jay Gruden acknowledged that, despite the severity of the injury, it may not prevent Smith from playing again, albeit not during this season.

"When you have an injury like that, it's more heartbreaking than it is physical," Gruden said. "It breaks your heart because this is what he loves to do. He loves to lead this team, he loves to be with his guys and now the season is over, and he has a long way back."

In the relatively inconsequential moments that followed Smith's injury, backup quarterback Colt McCoy stepped in. Despite a gallant effort, McCoy's efforts to grab a victory literally fell short on a 63-yard field-goal attempt by Dustin Hopkins as the Texans held on to beat the Redskins, 23-21. Most odd is that in the 1985 game where Theismann was injured, the Redskins were over the New York Giants by the exact same score.

RELATED Ezekiel Elliott continues to be workhorse for Cowboys

By Monday, players, coaches, fans and even media from all over the NFL were sending best wishes to Smith. If anybody can come back, it is Smith. His NFL career was blossoming for a third time with a third team -- after being unceremoniously replaced despite success with two others. This time, he led the Redskins to the top of the NFL's most publicized division, the NFC East, where they hold a one-game edge despite Sunday's loss.

And even as Smith began his long recuperation Monday, the Redskins held workouts to add another quarterback to the roster. McCoy, who has an interesting career himself, will remain the No. 1 quarterback but depth is necessary. The team invited a parade of prospects, including EJ Manuel, T.J. Yates, Mark Sanchez, Kellen Clemens and Josh Johnson.

As usual, the name Colin Kaepernick was floated, but there he did not get a look. Kaepernick's mere presence would certainly re-raise the level of controversy that automatically accompanies the mention of his name, regardless the reason.

But Sanchez was signed to be the backup, as expected, as Smith was put on injured reserve.

Through his tortured career at San Francisco and then Kansas City, there was something special about Smith that you won't find in statistics or data. After first being displaced by Kaepernick in San Francisco, and then Patrick Mahomes this year in Kansas City, there are many who cheered for Smith this year when he was traded to the Redskins (for cornerback Kendall Fuller and a No. 3 draft pick) and subsequently signed a four-year, $94 million contract extension.

Another team. Another chance.

Smith was a class act throughout everything regardless of his questionable treatment in San Francisco and his abbreviated but successful stay with Kansas City. Despite plenty of reasons to act otherwise, Smith has always been positive, always moving to the next challenge, seeking the next victory. Now that attitude is being tested to the max.

No top NFL quarterback has endured the breadth of controversy as Smith. We offer a mere summary here of the hell he endured. It began even before the 2005 draft and included weird convolutions that included some of the biggest quarterback names or personalities in recent NFL history -- Aaron Rodgers, Drew Brees, Philip Rivers, Peyton Manning, Kaepernick and Mahomes.

Smith, from Utah, was famously selected No. 1 in 2005 by the 49ers while Cal's Aaron Rodgers was televised ignominiously sliding to the Green Bay Packers at No. 24.

Revisiting a curious page in history, many who rated draft prospects were hesitant to believe in Rodgers' apparent abilities because of the so-called "Jeff Tedford effect" of the Cal coach whose previous prospects failed to live up to expectations: Trent Dilfer, Akili Smith, David Carr, Joey Harrington and Kyle Boller.

So Smith, who ran the spread offense at Utah with the deft skills of a fast-break point guard, was given the advantage. His coach was a guy named Urban Meyer, whose fame would increase in later years with a quarterback named Tim Tebow and his current stint at Ohio State.

Before that 2005 draft, the 49ers were considering a trade with the quarterback-rich San Diego Chargers. They had Philip Rivers, acquired in a weird 2004 draft-day deal from the New York Giants (partially in exchange for Eli Manning) and Drew Brees, whom they franchised in 2005 ($8.078 million).

During the league meeting in Maui that year, 49ers head coach Mike Nolan told me all four players were interesting -- Rivers or Brees in a trade and Smith or Rodgers in the draft. He admitted the trade was a longshot, but had to be taken seriously.

Nolan said he preferred Rivers in a trade because Brees was small and had durability concerns. In the draft, the coach preferred Smith because he thought Rodgers had an attitude that might not mesh with his own strong personality.

Of course, Brees stayed one more year in San Diego, then went to the New Orleans Saints -- where he became one of the NFL's best quarterbacks of all time. Rivers, who signed a $22.4 million rookie contract, has been a great quarterback for the Chargers since 2006.

Nolan picked Smith No. 1 and said aloud it would take the Utah star "three years" to fully grasp the 49ers offense. Nolan, who was gone by 2008, underestimated the situation, if not the quarterback. Smith labored for six offensive coordinators in his first six years.

The 49ers hired Jim Harbaugh as head coach in 2011. Although unsigned, Smith organized unofficial workouts during the lockout to help install the new coach's offense, the sixth system in his career.

Smith's leadership and team attitude would never be fully appreciated by Harbaugh, but the quarterback signed a one-year contract after the lockout ended and led the 49ers to a 13-3 record, beat Brees' Saints in the playoffs but lost the NFL title game in overtime to the New York Giants and Eli Manning.

But it soon became clear that Harbaugh wanted somebody other than Smith.

The 49ers already made a surprise 2011 draft pick in the second round, Reno quarterback Kaepernick, whose fast feet and strong arm were on display in the 2011 preseason.

Then in the spring of 2012, Harbaugh unofficially recruited veteran quarterback Peyton Manning -- although denying it all the time. Manning had been released by Indianapolis. Denials notwithstanding, the alert Smith countered by visiting the Miami Dolphins. When Manning signed with the Broncos, Smith agreed to a three-year, $24 million deal with the 49ers.

But there was still Kaepernick. He was big (6-4, 230), fast (4.5 in 40 yards) and had a bazooka for an arm. Intangibles aside, Harbaugh saw more upside in Kaepernick than he did Smith.

Kaepernick would soon become a center of controversy that had a massive impact on the 49ers in general, along with Smith, Harbaugh and more. It even eventually elicited mention by President Donald Trump.

In the wake of all this, the best 49ers team since the Bill Walsh era was dismantled as Smith was traded, Harbaugh fired and what had become a strong fan base noticeably dissipated.

It began simple enough. When Smith was concussed against the St. Louis Rams, Kaepernick came in. And, despite a momentary boost, that was really the beginning of the end for that brief 49ers dynasty.

"All I can do is play the best I can when given the opportunity," Smith told me during the height of drama in San Francisco. "You do what you can, when you can. What good does it do to complain? In football and in life, you are not promised tomorrow."

In a way, Smith may have been a benefactor, being traded to the Kansas City Chiefs, where he joined up with one of the best coaches in the game, Andy Reid.

Smith and Reid led the Chiefs out of the gate 9-0 in 2013, but lost a wild-card playoff game to the Indianapolis Colts, 45-44. After missing the playoffs in 2014, the Chiefs set a franchise record in 2015 with a 10-game winning streak, then blanked the Texans in the playoffs, 30-0. But they lost to the Patriots in the divisional round.

In 2016, Smith quarterbacked the Chiefs on a dramatic up and down season, made the playoffs and lost in a weird playoff game to the Pittsburgh Steelers, 18-16, on six field goals.

The 2017 season began with Smith's masterful performance that startled the Patriots in New England, 42-27. The Chiefs locked up the AFC West title prior to the last regular-season game, so first-round draftee Mahomes started and looked damned good in the season finale.

So it was not surprising when Smith was traded to the Redskins, a deal that was revealed during Super Bowl week even though it couldn't become official until the start of the league in March.

Now the quarterback who reminded "you are not promised tomorrow" is beginning what may be his longest road back.