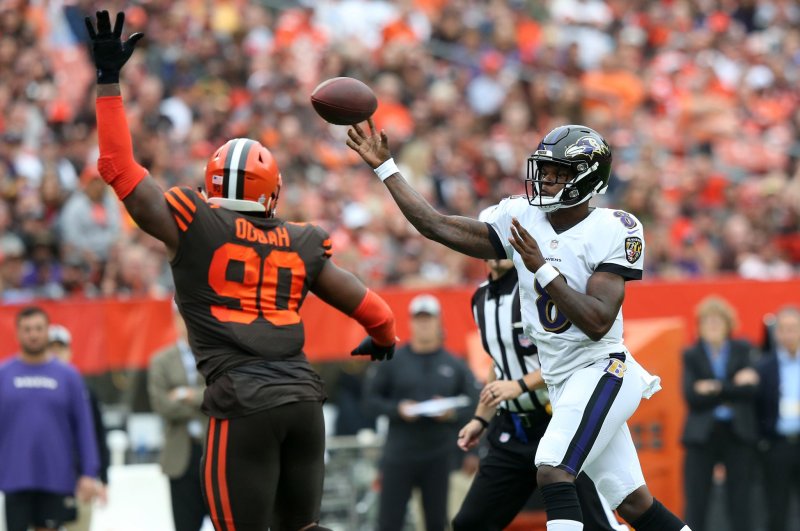 Baltimore Ravens quarterback Lamar Jackson throws a pass with pressure from Cleveland Browns' Emmanuel Ogbah in the first half on October 7 at First Energy Stadium in Cleveland. Photo by Aaron Josefczyk/UPI | License Photo

Nov. 18 (UPI) -- Rookie quarterback Lamar Jackson will get his first career start on Sunday when the Baltimore Ravens battle the Cincinnati Bengals.

The No. 32 overall pick in the 2018 NFL Draft gets the nod as Ravens starter Joe Flacco deals with a hip injury. Flacco did not practice this week. Robert Griffin III is also expected to see snaps during the AFC North clash.

Sources confirmed to NFL Network that Jackson will start the game.

Jackson has seen previous action this season, but hasn't appeared much at quarterback during those snaps. He is 7-of-12 on the season for 87 yards and a touchdown. He also has 28 carries for 139 yards and a touchdown. The rookie out of Louisville completed 50 percent of his passes during the preseason for 408 yards, three touchdowns and an interception. He also had 136 yards and three scores on 23 carries during the preseason.

Flacco, 33, has completed 61 percent of his throws for 2,465 yards, 12 scores and six interceptions in nine starts this season.

The Bengals and Ravens kickoff at 1 p.m. on Sunday at M&T Bank Stadium in Baltimore.

NFL // 4 days ago
'Unwanted' QB Sam Darnold stung by trade, vies to improve with Panthers
April 13 (UPI) -- Quarterback Sam Darnold said he was "stung" when he became "unwanted" and traded away by the New York Jets this off-season to the Carolina Panthers, but is now focused on self-improvement and learning a new offense.