Raiders, Cardinals battle it out for rare victory 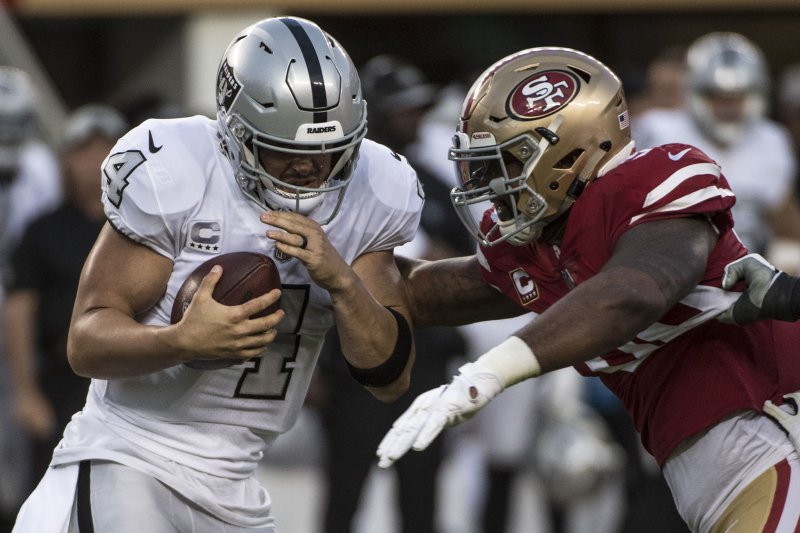 Oakland Raiders quarterback Derek Carr (4) is sacked by San Francisco 49ers defensive tackle DeForest Buckner (99) for a loss of five yards in the first quarter at Levi's Stadium in Santa Clara, California on November 1, 2018. The Raiders lost 34-3 to tie the New York Giants at the bottom of the NFL. Photo by Terry Schmitt/UPI | License Photo

The Cardinals (2-7) are coming off a 26-14 loss to the Kansas City Chiefs. Keeping that game close and the performance by running back David Johnson give Arizona hope that things will get better in the first season under head coach Steve Wilks.

It was the revival of Johnson as the two-pronged primary threat of an offense that's gone missing for most of this season.

RELATED Lions not giving up as they host Panthers

"It felt good. It made me feel like it was back to two years ago -- the 2016 offense," he said. "We got some momentum going as an offense running the ball. We got some confidence going as well."

It was the first time this season that Johnson resembled the back he was in 2016, when he was named All-Pro after rushing for 1,239 yards and catching 80 passes for 879 yards.

He missed all but one game last year with a severe wrist injury, but he seemed to come alive under new offensive coordinator Byron Leftwich, who seems intent on stressing the running game while utilizing Johnson's skills.

"As long as David is getting yardage and he's getting in the end zone," Wilks said, "I don't care what it feels like."

Johnson should have success against a Raiders defense that ranks 30th in the NFL against the run.

It should also take some of the pressure off rookie quarterback Josh Rosen, who threw two interceptions and was sacked five times in the loss to Kansas City. For the season, Rosen has more interceptions (eight) than touchdown passes (six), and that kind of ratio seldom produces success.

Although he is completing 71.5 percent of his passes, Carr has not been productive. The Raiders (1-8) have lost five games in a row and did not score a touchdown in either of their past two games.

Adding to his problems is the fact that two wide receivers -- Martavis Bryant (knee) and Jordy Nelson (knee) -- may not play. And the Raiders traded Amari Cooper to Dallas three weeks ago.

Running back Doug Martin has had some success in place of injured Marshawn Lynch, rushing for 61 yards against the Chargers and averaging 4.3 yards for the season.

Martin might make some headway against the Chargers, who rank 29th in the NFL against the run and lost run-stopping inside linebacker Denzel Perryman for the season because of a knee injury.

Otherwise, the Raiders have been a serious disappointment in Jon Gruden's first year in his return as head coach to Oakland.

Raiders owner Mark Davis is taking much of the blame.

"The buck stops with me," Davis told ESPN's Paul Gutierrez. "Where this team is right now is my fault."

But he stands behind Gruden's 10-year, $100 million contract.

Davis added that Gruden wanted to keep Khalil Mack, who was traded to Chicago in early September.

Gruden expects the bad days of today to spawn good days down the line.

"We're going to keep working hard, keep preparing as hard as we can, keep developing the players that are here, and hopefully that translates into some wins. We have seven weeks to spend with these players. The future is something we'll talk about later."