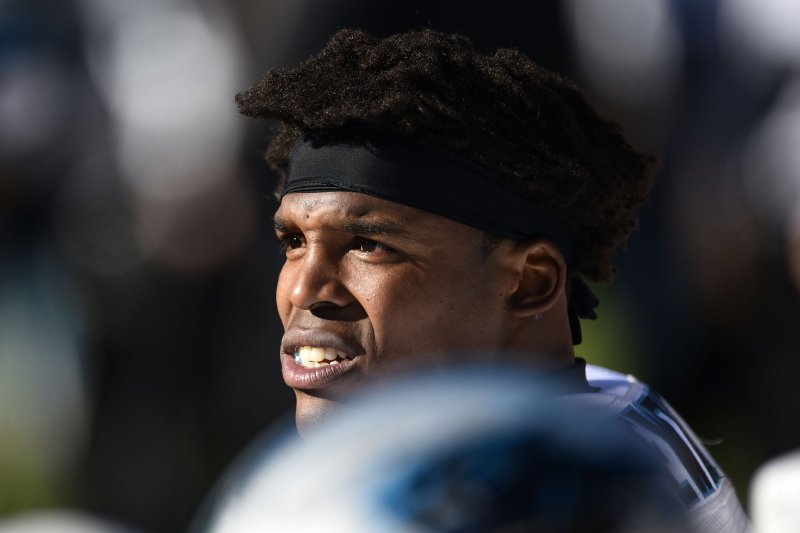 Carolina Panthers quarterback Cam Newton (1) looks on from the sidelines during the fourth quarter of an NFL football game against the Philadelphia Eagles on October 21 at Lincoln Financial Field in Philadelphia. Photo by Derik Hamilton/UPI | License Photo

Kosir posted another edition of Drip Chronicles Wednesday on Twitter. The footage included behind-the-scenes shots of Kosir sporting an orange suit and a wide brimmed hat, similar to a three-piece suit that Newton once wore.

"This is that next level behind the scenes photo shoot drip," Kosir tweeted.

Kosir -- an employee of Fox 46 Charlotte -- has been doing the stunts for months. And Newton has taken notice of Kosir's antics.

He recently told reporters that he commended Kosir for pulling off the outfits.

"The Drip Chronicles guy ... It has been something I kinda look forward to," Newton said. "He's going to have his hands full with this week. We may try to collab and do something. Tell him to keep his DMs open. It has been fun. I'm all for it man."

RELATED Lions not giving up as they host Panthers

"Me and Cam Newton are out here drippin," Kosir wrote for the caption of the Instagram photo, which has nearly 300 likes. The side-by-side shots featured Kosir sporting a nearly identical outfit adjacent to the Panthers quarterback, including multiple bracelets and a bandana headband.

Kosir's Instagram now features 18 different Newton-inspired outfit photos. He even got a coworker to mimic one of Newton's photos where the quarterback is posed next to Panthers linebacker Thomas Davis.

Kosir posts the photos on a weekly basis. He says his next photo is coming Friday morning.