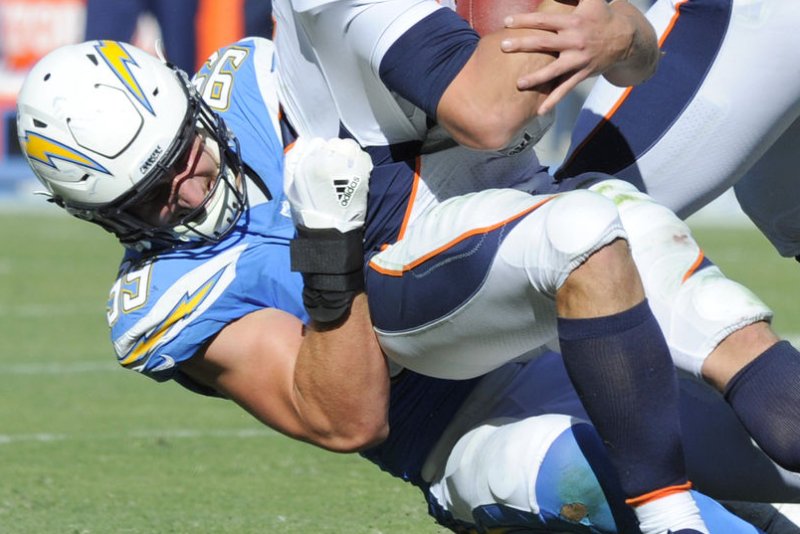 Joey Bosa of the Los Angeles Chargers makes a tackle during a game against the Denver Broncos last season. Photo by Lori Shepler/UPI | License Photo

Defensive end Joey Bosa of the Los Angeles Chargers, who has not played in a game this season because of a bone bruise in his left foot, was back at practice on a limited basis on Wednesday.

Head coach Anthony Lynn said Bosa is healthy enough to take part in individual drills and that the team will evaluate how to proceed moving forward.

There was no indication that he might be able to play on Sunday at home against the Denver Broncos, but Bosa has said that as soon as he can practice, he will play in games.

The 6-5, 280-pound Bosa, who the Chargers made the third pick of the 2016 draft as a two-time All-American out of Ohio State, sustained the foot injury in August and had not practiced since a few days before the season opener.

The 2016 NFL Defensive Rookie of the Year and a 2017 Pro Bowl selection, the 23-year-old Bosa has recorded 111 total tackles, including 23 sacks in 28 games in his first two seasons with the Chargers.

The Chargers (7-2) have won six consecutive games and are in good shape at second in the AFC West standings behind the Kansas City Chiefs (9-1), but once he is healthy Bosa should be a big factor down the stretch and in the playoffs.