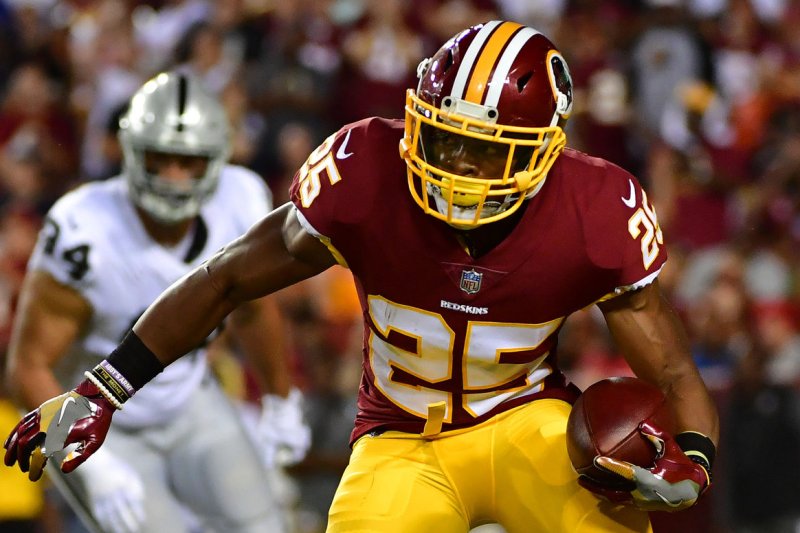 Washington Redskins running back Chris Thompson takes off during a game against the Oakland Raiders at FedEx Field in Landover, Maryland on September 24, 2017. Photo by Kevin Dietsch/UPI | License Photo

Washington Redskins running back Chris Thompson admitted to being frustrated after sitting out four games with rib injuries.

Thompson's primary medicine for the injury is rest, giving him extra time to think about being on the sideline.

"I can't lie and say I've been handling it well, because I haven't," the 28-year-old Thompson said, via the Washington Post. "It's real frustrating for me because I always want to be out there. I felt like I put together a really good offseason to be able to come back from this ankle injury. First couple games I was feeling good, and then it just seems like things started to happen after that. ...

"I've missed way too many games, in my opinion. This team, the owner, the president, Doug (Williams), all of those guys, they pay me to be here and be able to play week in and week out. For me to not be able to be out there, it's super frustrating and I just got to do everything I can to try to stay positive every day, but it's hard."

Thompson initially injured his ribs against the New Orleans Saints in Week 5, causing him to miss the next two games. The 5-foot-8, 195-pounder then returned to face the New York Giants, only to sustain another injury to the ribs that has kept him out of the last two contests.

"Yeah most likely, the rib thing, there's really not a lot of rehab you can do, it's just got to heal on its own and we'll wait and see," coach Jay Gruden said.

Thompson has rushed 26 times for 113 yards in five games this season. He also has 28 receptions for 209 yards and a touchdown.

Despite Thompson's troubles, the Redskins (6-3) are enjoying to their best start since 2008.