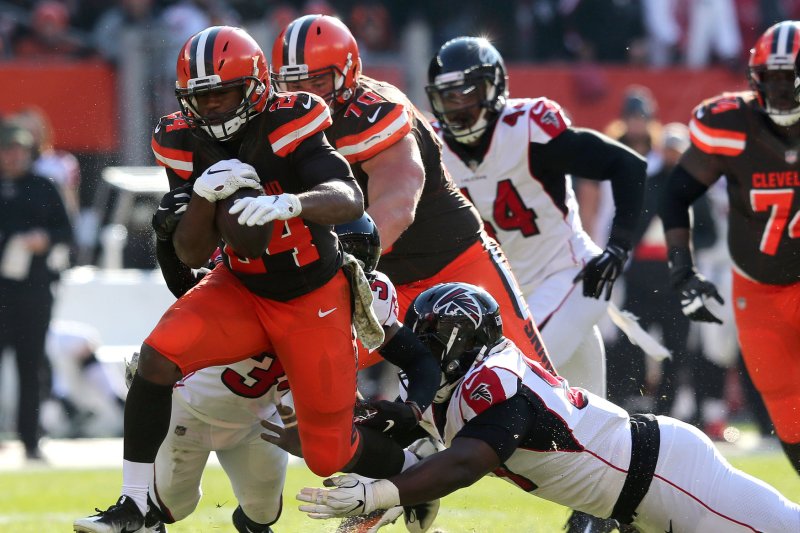 The Browns got three touchdown passes from Baker Mayfield and 176 yards rushing from Nick Chubb to overpower the Atlanta Falcons 28-16 on Sunday. The loss drops Atlanta to 4-5 and gives the Falcons no margin of error if they have any chance to return to the playoffs.

"I told the team I thought we took a step back today," Atlanta head coach Dan Quinn said. "That's tough to see and tough to say. I also told them we must regroup."

The Falcons turned the ball over twice on fumbles and struggled on third down, an area which they've been among the best in the league. Atlanta converted only 5-of-14 third downs and saw its three-game winning streak come to an end.

RELATED Rams, Chiefs denied in bids to play in Denver ahead of Mexico City tilt

"We knew they were really good at the ball," Quinn said. "They had a good turnover margin. They had led the league in takeaways, and so we made that a real emphasis for us during the week. We thought we would have some opportunities to create some plays in space, and get some explosives, and we didn't do that to the level that we needed to today."

The Falcons defense, which played well in last week's road win at Washington, never found its footing. The Browns were led by Mayfield, who hit on the first 13 passes he threw and wound up completing 17-of-20 throws for 216 yards and a career-high three touchdowns. Chubb, who went to school at the University of Georgia, carried 20 times for 176 yards, including a 92-yard touchdown that set a Cleveland record for longest run from scrimmage.

"I thought Baker played well, ran the team well, ran the clock well and did a good job there. It was nice to see Chubb get a franchise record with a pretty good run," Cleveland coach Gregg Williams said.

Atlanta quarterback Matt Ryan completed 38-of-52 passes for 330 yards and two touchdowns, but the running game that was so good a week ago was limited to 71 yards, 18 of that coming on one run. Tight end Austin Hooper led the club with 10 receptions, one of them for a touchdown, and Julio Jones caught seven passes for 107 yards and one touchdown.

The Browns (3-6-1) have won three games for the first time since 2015. It was the first win for Williams, who took over when Hue Jackson was fired.

The Browns scored first on a 28-yard pass from Mayfield to Rashard Higgins, but Atlanta took a 10-7 lead on a 40-yard field goal from Giorgio Tavecchio and a 1-yard pass from Ryan to Jones, his second touchdown reception in as many weeks.

"Won the day," Williams said. "That is the big thing. Without looking ahead, we won the day. They did a good job, and he did a good job on where you think he is going to go with the ball and how he was able to move things around and keep people open all over the field. He did a very good job with that."

The Cleveland defense denied Atlanta on a goal-line stand in the fourth quarter and extended the Falcons to fourth down on the next possession before Ryan found Hooper for a 3-yard score.

Quinn admitted afterwards that he didn't see this one coming.

"No, I certainly didn't," Quinn said. "Every time we go, it's 100 percent the same mindset and attitude to go fight for it. Coming into the weekend, from a planning standpoint of what they were and how they were going to attack, it was the right way. But like I said, we're fighting for consistency, and we didn't get that done today.

"We certainly had a chance, with coming out and having the ball in the second half. Like I said, it started with the turnover and kind of went worse from there. I thought we'd have a chance at the end of the two-minute at the half to go for one. We always like deferring at the start so that we have a chance to go on those, but today we didn't get that done. That's been a strong part of our team."

The Falcons defense showed no discernible improvement with the addition of pass rusher Bruce Irvin, who was credited with two tackles. It wasn't only Irvin's fault; Atlanta failed to have a sack or a tackle for loss. Atlanta's only takeaway came when Damontae Kazee picked off a failed halfback option pass.