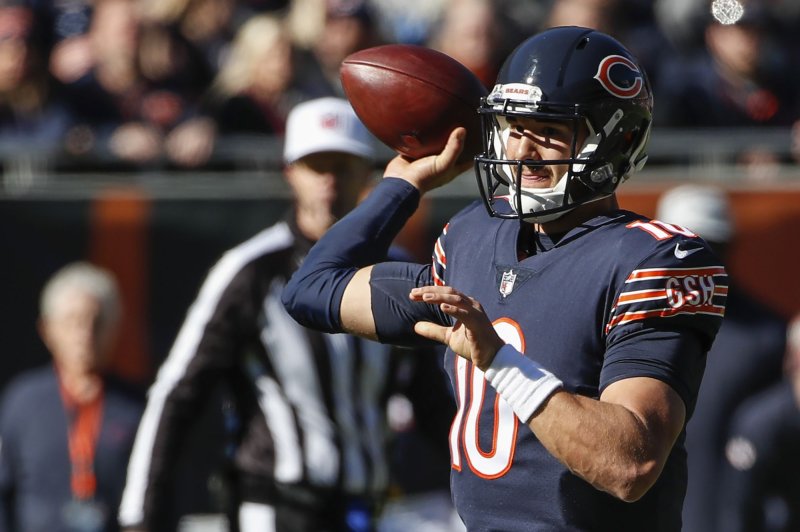 Chicago Bears quarterback Mitchell Trubisky (10) looks to pass the ball against the New England Patriots during the first half on October 21, 2018 at Soldier Field in Chicago. Photo by Kamil Krzaczynski/UPI | License Photo

With all the attention focused on Khalil Mack's return from an ankle injury for the Chicago Bears on Sunday, wide receiver Allen Robinson's return went virtually unnoticed.

Or, at least it seemed the Detroit Lions didn't notice him.

Robinson came back from a groin strain to make two touchdown catches and set up another score with a catch as the Bears dominated the Lions 34-22 to end a string of 10 straight losses within the NFC North.

"Each and every week I think we put a lot of stress on defenses," Robinson said.

Mitchell Trubisky finished 23-of-30 for 355 yards and three touchdowns against the fourth-ranked pass defense in the NFL. Robinson and rookie Anthony Miller were the chief beneficiaries, and they helped the Bears offset a horrendous day by kicker Cody Parkey.

"Dialed in," was how Miller described Trubisky.

"I thought Mitch probably had his best game of the season without a doubt," Bears head coach Matt Nagy said. "He was on fire, he was efficient, threw the ball with conviction. His eyes were great."

Robinson had six catches for 133 yards, Miller had career highs of five catches and 122 yards with a 45-yard touchdown, and the Bears (6-3) used a no-huddle attack extensively in the first half to score on their first four possessions.

"I think that's just another element we added this week, going to no huddle," Trubisky said. "And we're going to continue to build off that package."

The threat of big plays by Robinson had been missing for two weeks, but he broke the tackle of rookie DeShawn Shead immediately on a short slant and sprinted for a 35-yard gain on the Bears' first possession to set up Tarik Cohen's 3-yard touchdown run. Then, he beat Shead again downfield for a 36-yard score.

"For me, it was just winning my one-on-one battles," Robinson said.

The 45-yard touchdown pass to a wide-open Miller gave the Bears a 19-0 lead and came when Glover Quin missed a tackle at the 20-yard line.

"It was just Anthony getting open and catching the ball and making the guy miss and going the distance," Trubisky said. "When we play fast a lot of teams have miscommunication like that."

The Bears made it 26-0 on Trubisky's 4-yard quarterback draw after Bryce Callahan picked off Matthew Stafford. The score could have been much worse but Parkey hit the uprights on two field goals and two extra points and all of them missed.

"I don't think I've hit the post four times in my whole life, and I've been kicking probably for 15 years," Parkey said.

Robinson added his second touchdown catch -- from 26 yards -- in the second half. It helped offset the Lions' late surge with a Matt Prater 52-yard field goal, and Stafford's fourth-quarter scoring passes of five yards to Kenny Golladay and 13 yards to Kerryon Johnson.

But the Bears' offense was too much all day.

"Obviously we're not trying to give up touchdowns," Lions head coach Matt Patricia said. "When they do score, it's obviously a problem and we need to get it fixed.

"Had some mistakes out there that we need to get straightened out. I thought we did that. Thought we tried to adjust and come out and do better in the second half -- obviously not a good start by us."

The Bears' defense kept the Lions (3-6) from getting the passing game in gear until late. Mack led a pass rush that had six sacks of Stafford, who was sacked 10 times by Minnesota in the previous game. Mack had two of the sacks in his return from an ankle sprain.

"I was telling [outside linebackers] coach [Brandon] Staley I've got to play catchup," Mack said. "I've got to get to the quarterback as many times as I can."

Mack has seven sacks for the season. The Bears' defense took the ball away three more times. Beside Callahan's interception, Prince Amukamara had a pick and Adrian Amos recovered a fumble.

"We have good plans going into games," Stafford said. "We've just got to go out and execute them.

"Had the chance to move the ball really early, we just didn't continue drives and those are, again, negative plays. Sacks early in the game, penalties, whatever it is, you've got to avoid those, and when we get down there, score."

NFL // 2 days ago
QB Joe Burrow says Bengals 'not panicking' after starting 2022 season 0-2
Sept. 22 (UPI) -- Quarterback Joe Burrow said the Cincinnati Bengals aren't panicking and called on everyone to "relax" about the team's 0-2 start to the season and the constant duress he's faced on the field since last year.

NFL // 3 days ago
Bills' Bobby Hart suspended one game for hitting Titans coach
Sept. 21 (UPI) -- Buffalo Bills offensive lineman Bobby Hart is suspended for one game after he threw a punch at a Tennessee Titans player, but instead hit a coach, after a Week 2 win, the NFL announced.

NFL // 4 days ago
Bills CB Dane Jackson released from hospital after injury vs. Titans
Sept. 20 (UPI) -- Buffalo Bills cornerback Dane Jackson, who prompted a somber scene due to an injury he sustained in a Week 2 win over the Tennessee Titans, was released from a Buffalo, N.Y., hospital, the Bills announced Tuesday.
Advertisement