Carolina Panthers head coach Ron Rivera watches on the sideline in the second quarter of the Pittsburgh Steelers' 52-21 win on Thursday night at Heinz Field in Pittsburgh. Photo by Archie Carpenter/UPI | License Photo

That's an obvious question surrounding the Carolina Panthers in the wake of a humbling 52-21 loss at the Pittsburgh Steelers on Thursday night.

Losing on the road against a quality opponent was not a shock to the Panthers. The fact that they were blown off the field after entering the contest on a three-game winning streak was a jarring blow to the team's collective psyche.

"This was a game we were really looking forward to, a game to measure ourselves against one of the better teams in the league," veteran tight end Greg Olsen said. "We got that answer, and well, we have a lot of work to do."

Carolina had plenty of reasons to feel confident against the Steelers. The Panthers started their winning streak by winning on the road against the reigning Super Bowl champion Philadelphia Eagles before rolling to a pair of double-digit victories over Baltimore and Tampa Bay.

After giving up a franchise record-tying point total and watching Steelers quarterback Ben Roethlisberger compile a perfect 158.3 passer rating, the mood in the Panthers' locker room was decidedly different.

"A nice dose of humble pie for us," linebacker Thomas Davis said. "The scoreboard was [indicative] of how we played."

Both Panthers head coach Ron Rivera and quarterback Cam Newton each chalked up the loss to an any-given-Sunday (or Thursday in this case) scenario.

"At the end of the day guys, this [stuff] happens, and I'm going to put it just like that. OK, let's just be honest about it. It happens," Rivera told reporters. "This is my 30th year in the NFL. I have seen games like this; I've been part of games like this, on both sides. At the end of the day, [if] you continue to dwell on it and worry about it, it's going to creep in.

Newton came into Thursday's matchup off his best stretch of the season, throwing six touchdown passes against zero interceptions during Carolina's three-game run.

And while the 2015 NFL Most Valuable Player did register his fourth straight passer rating above 100, he absorbed a season-worst five sacks and committed a costly first-quarter gaffe to swing the momentum in Pittsburgh's favor.

Attempting to avoid a sack in his own end zone, Newton threw an ill-advised pass up the middle of the field that was returned 17 yards for a touchdown by Steelers linebacker Vince Williams. The two touchdowns in a 13-second span put Pittsburgh ahead 14-7 and Carolina never recovered.

"You are going to have these types of games in the league," said Newton, "but it's going to be about how we rebound."

The Panthers actually started well and seemed intent on making a statement, going 75 yards in nine plays before Newton connected with Christian McCaffrey on a 20-yard scoring strike -- the first of McCaffrey's three touchdowns.

Roethlisberger answered with a 75-yard touchdown pass to JuJu Smith-Schuster on Pittsburgh's first play from scrimmage and Newton followed with the ugly pick-six to start Carolina's abrupt spiral.

"We had a really good first drive, and after that, we were kind of on our heels," Panthers left guard Greg Van Roten said. "They kept bringing the pressure and we had a hard time keeping Cam clean tonight."

Added Rivera: "I thought everything was going fine until we gave up a 75-yard touchdown."

McCaffrey also pulled in a 25-yard scoring pass from Newton and added a 1-yard touchdown run. He finished with 77 yards rushing on 14 carries to go along with five receptions for 61 yards, but it was an otherwise forgettable night for Carolina.

"We have to move on and it only counts as one loss. But we also can't pretend it didn't happen, because it did, and it happened for a reason," said Olsen. "If we don't get better, when we play good teams it will happen again.

"We have to correct this. This stuff just doesn't all the sudden go away because we pretend not to look at it. We have to address things, get better, and if you do that, then it does just count for one. If you don't, it lingers and you're in trouble." 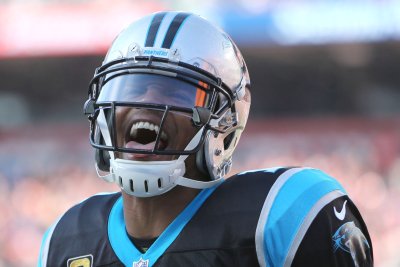