Pittsburgh Steelers running back James Conner takes off against the Baltimore Ravens during a game at M&T Bank Stadium on November 4, 2018. Photo by Kevin Dietsch/UPI | License Photo

Almost everything went right for the Pittsburgh Steelers in Thursday night's mauling of the Carolina Panthers -- with one glaring exception.

Starting running back James Conner was injured in the fourth quarter of Pittsburgh's 52-21 romp and was placed in the NFL's concussion protocol.

Conner had another solid night before exiting the contest, rushing for 65 yards and a touchdown on 13 carries and adding one reception for eight yards.

The Steelers did not shed much light on Conner's condition after the game.

"He is in the protocol," said coach Mike Tomlin. "I don't know to what extent. I am sure we will have more information for you next time we come together."

Pittsburgh does has extra time before its next game to allow Conner to recover, but his injury adds another layer of intrigue with holdout running back Le'Veon Bell back in town.

Bell, who has yet to sign is $14.5 million franchise tender, faces a Tuesday deadline to report to the club if he hopes to play at all this season.

Conner has played superbly in the absence of the perennial Pro Bowl running back, rushing for 771 yards and 10 touchdowns. He also had 39 receptions and another score.

A third-round pick out of Pittsburgh in the 2017 NFL Draft, Conner has scored eight touchdowns (seven rushing) during Pittsburgh's five-game winning streak, a span in which the Steelers have amassed 177 points.

"We have stuff rolling as a unit right now," Steelers tight end Jesse James said, "but Le'Veon is such a great player. We've seen what he's done in his previous years. We know what he's capable of, but you got to play one day at a time."

RELATED First African-American to be drafted and play in the NFL, Wally Triplett, dies

Pittsburgh owner Art Rooney said in a radio interview Thursday that he expects Bell to report next week.

"We know he's back in Pittsburgh, and so we're hoping to have some communications with him over the weekend, and we're kind of expecting he will be back next week," Rooney told SiriusXM NFL Radio.

Still, Bell's absence has fueled some friction within Pittsburgh's locker room. Quarterback Ben Roethlisberger, who threw for five touchdowns and compiled a perfect 158.3 passer rating on Thursday night, waved off a question about the running back following the game, saying he'd rather not comment on any player who isn't in the locker room.

"Honestly, no one cares anymore," said DeCastro. "I have to block some of the best players on the best defense in the world. Do you think I'm going to worry about a guy who's not here?"

Added Villanueva: "I love playing with Conner. I don't have anything to say about Le'Veon. I don't even know what shape he is in right now." 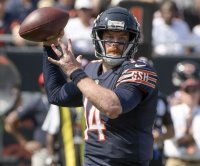 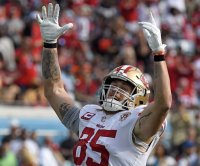