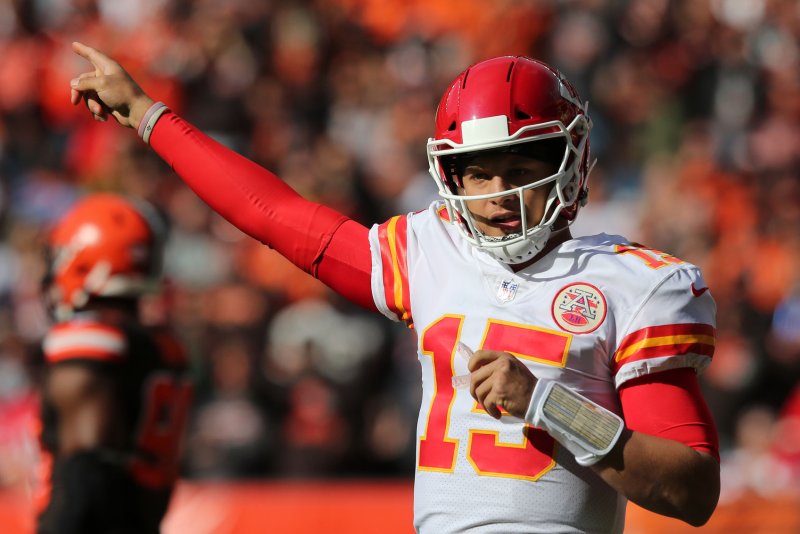 CLEVELAND -- Chiefs head coach Andy Reid worked with Brett Favre in Green Bay and Donovan McNabb at Philadelphia, yet even he finds himself taken aback by some of the throws he sees second-year quarterback Patrick Mahomes make as he assaults record books just 10 games into his NFL career.

"I sit there -- I've been around a long time -- I sit there and I go, 'Whew, that's pretty good,'" Reid said during his Monday press conference following his team's 37-21 romp past the Cleveland Browns.

Mahomes turned in another of his string of virtuoso performances on Sunday against the Browns. He turned in a stellar first half, completing 12 of his first 16 passes for 232 yards and two touchdowns before an interception on a desperation pass on the final play of the half.

He finished the game with 375 yards passing, establishing a career best. He's topped the 300-yard passing mark in each of his last eight games. That ties Indianapolis quarterback Andrew Luck for the second-longest streak in league history. With another 300-yard performance next Sunday against the Arizona Cardinals, Mahomes can tie the NFL record of nine straight reached twice by New Orleans quarterback Drew Brees.

But Mahomes piles up the passing numbers by not merely sitting in the pocket and hurling the ball downfield. He gets the ball out of his hands quickly to his array of playmakers such as running back Kareem Hunt and tight end Travis Kelce, who combined for five touchdowns against the Browns Sunday. He also does it by delivering the ball to his receivers by any means necessary, using multiple arm angles and platforms.

He resorts to throwing the ball left handed on occasion, and can even deliver an on-target throw while falling down as he did on Sunday, picking up 16 yards on a throw to Kelce against the Browns.

"Very seldom do you just get back in the National Football League and be able to take a drop like you can in practice with nobody and then he'll throw," Reid said. "It just doesn't happen like that normally. So you've got to be able to throw from different angles with your weight distributed in different places."

Mahomes works with quarterback coach Mike Kafka on as many different situations and scenarios as the pair can dream up during practice. Other quarterbacks do as well. But Reid says not just any quarterback has the flexibility and the arm talent to do what Mahomes pulls off weekly.

Reid worked with quarterbacks who could do it. He has no problem putting Mahomes in a class including Favre, McNabb and his former BYU teammate Jim McMahon.

"I played with Jim McMahon and he did all that crazy staff, and Favre did the crazy (stuff), the Donovan thing," Reid said. "I've seen it, but there's a certain, 'Wow, that was pretty good right there.' And he has one or two of those a game. He's blessed that way."

Some coaches might worry about comparing a second-year quarterback with 10 career starts to a Hall of Famer such as Favre. But Reid has no such worries about Mahomes. His gunslinger may join in elaborate celebrations with his teammates or flex his muscles after a big play. But he's also the first to tend to a fallen opponent, such as he did Sunday when Browns cornerback E.J. Gaines took a nasty hit during a first-quarter play. And off the field, Mahomes remains all business in his preparation.

"He is professional, enough to where when he's off the field he handles that situation, whatever the situation is, whether he's with little kids or you all, he handles it the right way and he's got a knack for that," Reid said.

--WR Sammy Watkins briefly left Sunday's game with an undisclosed foot injury, but later returned to the game. He appeared in the locker room with a slight limp after the game, but the club doesn't expect to update his status until they return to practice Wednesday.

--LB Anthony Hitchens started Sunday's game against the Browns despite a rib contusion and played 52 of the team's 79 defensive snaps. He briefly left the game in the first quarter for an adjustment to the protection for his injured rib but later returned to the game.

--WR Tyreek Hill received treatment on the sideline during the game for his injured groin muscle, but he played 62 of the team's 64 offensive snaps against Cleveland. The injury doesn't expect to keep him off the field in Week 10 against the Arizona Cardinals.

--LB Justin Houston returned to practice on a limited basis last week and appears nearing a return to the field this week against the Arizona Cardinals.

--S Daniel Sorensen continues practice with the team while on injured reserve in his recovery from a tibial plateau fracture. The Chiefs have until Nov. 13 to return Sorensen to the active roster.

NFL // 3 days ago
49ers 'content' with QBs Purdy, Lance; won't re-sign Garoppolo, coach says
Feb. 2 (UPI) -- The San Francisco 49ers are "content" with Brock Purdy and Trey Lance as the top quarterbacks on their roster and will not bring back Jimmy Garoppolo next season, coach Kyle Shanahan told reporters.

NFL // 5 days ago
Bengals' Pratt regrets yelling at teammate Ossai for penalty vs. Chiefs
Jan. 31 (UPI) -- Linebacker Germaine Pratt told reporters that he was "wrong" for screaming at teammate Joseph Ossai for the role his penalty played in the Cincinnati Bengals' loss to the Kansas City Chiefs in the AFC title game.
Advertisement