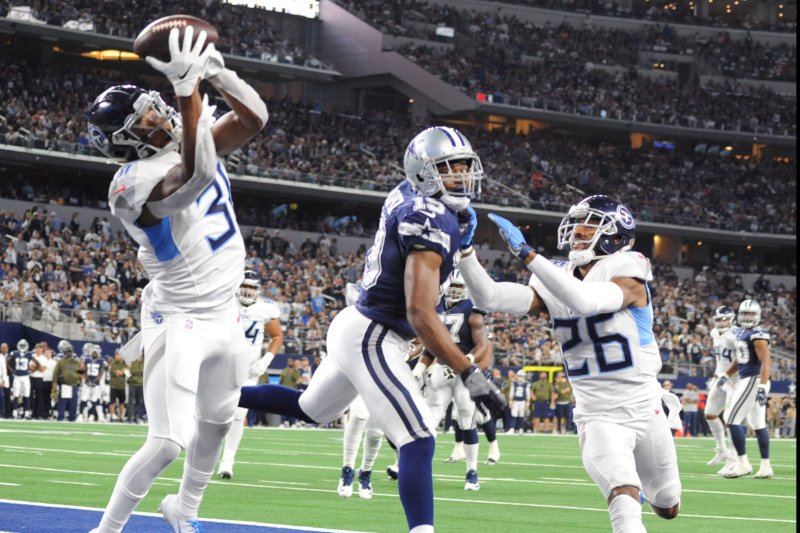 Dallas' Amari Cooper scores on a 4-yard pass against the Tennessee Titans Monday night during the first half at AT&T Stadium in Arlington, Texas. Photo by Ian Halperin/UPI | License Photo

Dallas Cowboys RB Zeke Elliott stiff arms Tennessee's Logan Ryan as he runs down the sidelines during the first half at AT&T Stadium in Arlington, Texas on Monday night. Photo by Ian Halperin/UPI | License Photo

Dallas Cowboys WR Amari Cooper scores on a 4-yard pass against the Tennessee Titans during the first half at AT&T Stadium in Arlington, Texas on Monday night. Photo by Ian Halperin/UPI | License Photo

Tennessee Titans WR Dion Lewis scores on a 18-yard touchdown catch against the Dallas Cowboys Monday night during the first half at AT&T Stadium in Arlington, Texas. Photo by Ian Halperin/UPI | License Photo

Dallas Cowboys QB Dak Prescott scrambles out of the pocket against the Tennessee Titans Monday night during the first half at AT&T Stadium in Arlington, Texas. Photo by Ian Halperin/UPI | License Photo

The Dallas Cowboys Cheerleaders perform Monday night during the game with the Tennessee Titans at AT&T Stadium in Arlington, Texas. Photo by Ian Halperin/UPI | License Photo

The Dallas Cowboys Cheerleaders perform Monday night during a game with the Tennessee Titans at AT&T Stadium in Arlington, Texas. Photo by Ian Halperin/UPI | License Photo

A Dallas Cowboys Cheerleader performs Monday night during a game with the Tennessee Titans at AT&T Stadium in Arlington, Texas. Photo by Ian Halperin/UPI | License Photo

ARLINGTON, Texas -- The Dallas Cowboys appeared to be on the verge of throwing a first-quarter haymaker and rocking their way to another home victory.

Everything was going according to plan as quarterback Dak Prescott cashed in a takeaway by throwing a touchdown pass to shiny new star wide receiver Amari Cooper. And then a second recovery of a Titans fumble on the Tennessee end put Dallas on the doorstep of complete control.

But that's where the Cowboys' good vibes ended.

Tennessee safety Kevin Byard picked off a Prescott pass in the end zone and the Titans never looked back on the way to a 28-14 victory on Monday Night Football at AT&T Stadium.

Prescott was looking Cooper's way often early in the game and Tennessee turned that against the Cowboys. When the Dallas QB tried to force the ball to Cooper in the end zone, the Titans took the opportunity to turn the momentum.

"It was huge," Titans quarterback Marcus Mariota said. "The defense has done an unbelievable job throughout the year in building us up, and they did that again tonight. ... We've got to do a better job being complimentary and not turning the football over and doing a better job of starting the games faster."

After Byard's interception, Mariota led an 80-yard touchdown drive that running back Derrick Henry finished with a one-yard dive.

"That was the difference, simple as that," Prescott said. "Our defense gets us a turnover there. We're up seven points and I go down there and try to force the ball and give it right back to them. It's a 14-point swing."

Tennessee took its first lead when Mariota hit running back Dion Lewis for an 18-yard touchdown on a screen pass.

And although Dallas answered with a Prescott 23-yard touchdown pass to Allen Hurns before the half, the Titans didn't forget how they took over momentum so easily in the first half.

Tennessee controlled the second half, winning it 14-0 and handing Dallas (3-5) its first home loss of the season.

Mariota passed for an efficient 240 yards, completing 21 of 29 passes. He lost a fumble in the first half, but he wasn't intercepted. And Mariota picked apart the Cowboys' defense on third downs, converting 11 of 14.

"It's nice," Mariota said about third-down and red-zone efficiency. "It's something to build off though. ... It's definitely nice to see what we were able to do tonight."

Prescott finished with 243 passing yards with the two touchdowns, the interception and a costly third-quarter fumble. He was sacked on a third-and-13 from the Dallas 42, lost the ball and Titans linebacker Wesley Woodyard recovered at the Cowboys' 40.

Tennessee turned that takeaway into the go-ahead touchdown. Mariota directed a 7-play, 40-yard drive that he finished with a 7-yard TD pass to tight end Jonnu Smith.

"They did a better job with their sudden-change opportunities than we did," Garrett said. "That was a big part of the game."

Dallas, which has not won on the road this season, was nonetheless a buyer at the trade deadline. The Cowboys gave the Oakland Raiders a first-round pick for Cooper. Dallas also tweaked its coaching staff during its bye week, firing offensive line coach Paul Alexander, promoting Marc Colombo to that position and bringing in Hudson Houck as an advisor.

But the road to becoming a contender this season looks like a long one now that Dallas heads off for two straight road games before returning home on Thanksgiving.

"We just didn't get the job done and we've all got to do better and it starts with me," Prescott said. "It's very disappointing coming off the bye week."