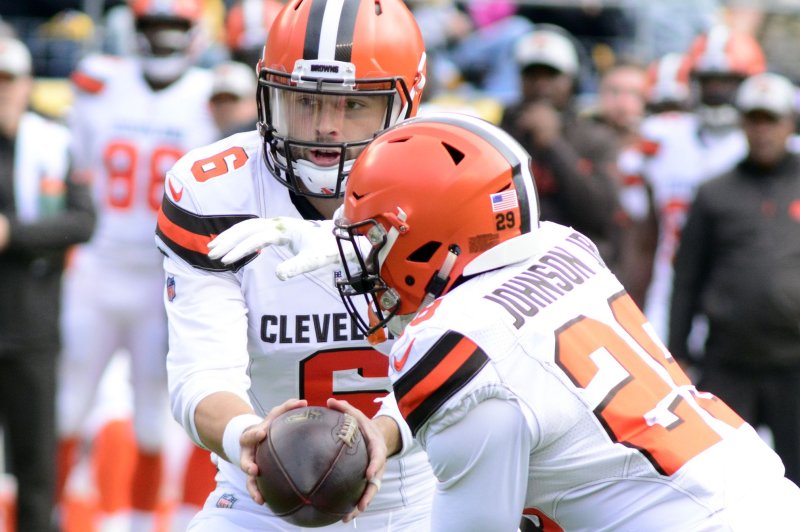 Cleveland Browns quarterback Baker Mayfield hands off the football to running back Duke Johnson during a game against the Pittsburgh Steelers at Heinz Field on October 28, 2018. Photo by Archie Carpenter/UPI | License Photo

The Cleveland Browns are on a four-game losing streak, but as they dissected some of what unfolded in a 37-21 loss at Kansas City, they were able to see some positive aspects on Monday, especially offensively.

Nobody seemed to benefit more from the approach than dual threat running back Duke Johnson. Johnson did not do much running but had nine catches for 78 yards and two touchdowns.

A year ago, Johnson led the Browns with 74 catches for 693 yards but this year he has 29 receptions for 281 yards and the two TDs were his first of the season. Before Sunday, Johnson's season high was four catches and 73 yards.

So naturally the question posed to Johnson was centered around the change in play callers.

"I guess you could look at it that way," Johnson said Monday. "Again, it's the same plays we've been calling, the same offense. There's just certain things that coach Kitchens likes better than coach Haley did."

"Freddie did a good job and Baker, too," Williams said. "Baker's understanding of that from the read process - when a play is called as a quarterback, you don't automatically know it is going to go to that person. There is a read definition that takes you to that person, but from Baker and Freddie, they did a good job with that.

"It was good to see that with Duke. Just like what we have talked about with other people, I think he can do more and he will. He had a good fire about him, and he will continue to improve too. We need him to improve."

--CB Denzel Ward is dealing with a hip injury after getting hurt Sunday. On Monday, coach Gregg Williams did not have an update on Ward's condition.

--CB E.J. Gaines sustained a concussion in Sunday's loss at Kansas City. Williams did not give an update on his status.

--LB Christian Kirksey injured his hamstring in the second quarter of Sunday's loss at Kansas City. Kirksey has 29 tackles in seven games this season and on Monday Williams did not update his status.

--T Greg Robinson made a positive impression Sunday in his first start for the Browns. The former No. 2 overall pick of the 2014 draft, he started in place of Desmond Harrison, who was too sick to play.

--DB Damarious Randall sat out Sunday due to a groin injury though it was reported he was a healthy scratch. On Monday, coach Gregg Williams said his decision to sit Randall was made so that he could avoid missing multiple games.