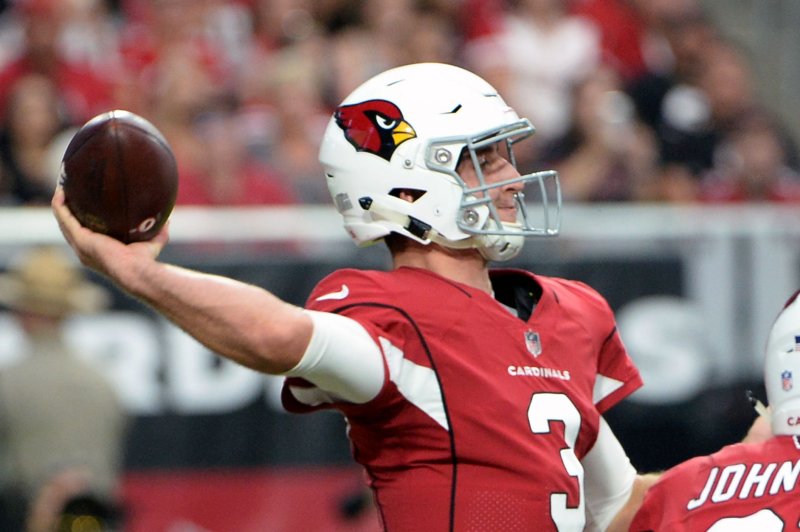 Arizona Cardinals fans may see for many years the winning touchdown connection of rookies Josh Rosen and Christian Kirk.

They have already heard it twice this season, both times against the San Francisco 49ers in the Cardinals' only wins of the season.

Arizona's first play against San Francisco in Week 5 was a 75-yard touchdown from Rosen to Kirk. On Sunday, the Cardinals capped a game-winning drive with the same rookie-to-rookie connection in the 18-15 win.

"Nothing really fazes this guy in a negative way," coach Steve Wilks said of Rosen on Monday. "He takes everything and he tries to learn from it. ... This experience (Sunday), particularly that last drive, is going to help him grow."

RELATED Jets neither winning nor entertaining

Rosen became the youngest quarterback in the Super Bowl era (beginning in 1967) to win a game by rallying a team from a fourth-quarter, double-digit deficit. Rosen was only 21 years and 260 days old Sunday.

It was also the first touchdown at home for Kirk, an Arizona native who played high school football at Scottsdale.

Kirk finished the game with only three receptions on seven targets. Two of his catches and that game-winning touchdown came on the final drive. Before that, he had only been targeted once.

Rosen tried to connect with Kirk over the middle in the second quarter, but San Francisco safety Jaquiski Tartt intercepted the pass. It was Rosen's only interception of the game.

The Cardinals achieved their fourth-quarter turnaround behind Rosen, who was 7-for-12 as the Cardinals drove 73 yards to take the lead. It culminated with the touchdown to Kirk, a 13-yard pass over the middle with 0:34 left in the game.

Kirk stayed on the turf shaken as the crowd was in a frenzy.

"I laid there for a second because it didn't feel good, getting hit like that," Kirk said, "so, I kind of had to let that wear off. ... It feels amazing; it was just a lot of pent-up emotion.

"Obviously, we've all been kind of frustrated with what's been happening, and this week I think we just approached it with a different attitude, a different mindset, a lot of energy, working our tails off and it just all came out tonight and worked for us."

Kirk joked with veteran Larry Fitzgerald about which of them would buy dinner once they left the stadium. Rosen also talked about how much fun he had in the comeback.

Kirk added, "I knew just from the depth of my route that I was going to be in-bounds, just based off the ball that Josh gave me. I had to stretch out for a little bit, so that's why I knew, when it hits my hands, I've got to tuck it really quick because I'm about to get hit."

Rosen and Kirk haven't connected for a touchdown outside of the two wins over the 49ers.

"It was just the same stuff we were working on in practice all week," Kirk said. "And it paid off for us, especially in the two-minute aspect. It's something we work on almost every day. And so, like I said, it paid off for us and all we had to do was make the plays when they came to us."

--S Tre Boston (shoulder/ribs) was hurt during the 49ers game. He should be available after the Cardinals return from their bye week.

--G Justin Pugh (hand) suffered an injury last Sunday. He also should be ready to play when the Cardinals resume their schedule after the bye week this week.

--RB David Johnson tied his season-high in receiving yards and finished with 100 total yards in the win over San Francisco on Sunday. He had 59 yards rushing on 16 carries and added four catches for 41 yards.

--S Antoine Bethea left Sunday's game late in the third quarter with a stinger. He was down on the field talking to trainers for a while, but returned to the game quickly.

--CB Patrick Peterson allowed San Francisco's Marquise Goodwin just one reception on four targets. The reception, on a quick slant in the third quarter, turned into a 55-yard catch-and-run touchdown. It was San Francisco's lone touchdown of the game. Peterson, who requested a trade earlier last week before conceding it won't happen, broke up a deep shot for Goodwin midway through the fourth quarter to keep the Cardinals' deficit at 15-10.