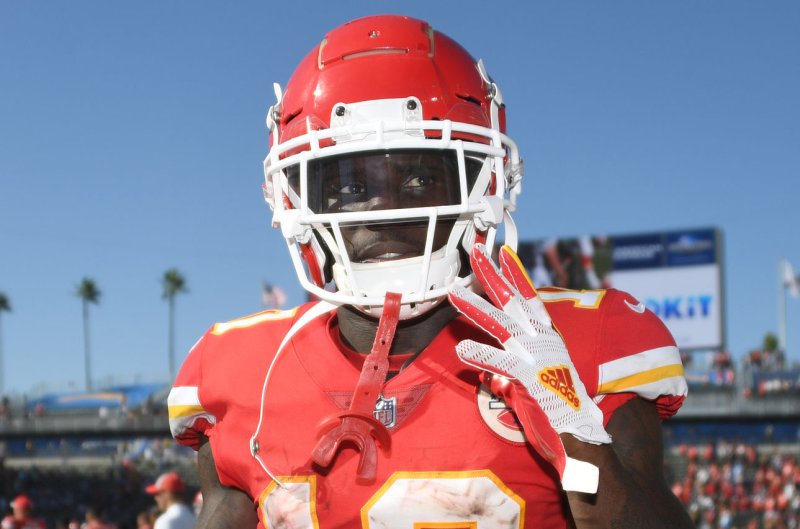 Kansas City Chiefs wide receiver Tyreek Hill walks off the field at the end of the game against the Los Angeles Chargers on September 9, 2018 at StubHub Center in Carson, California. Photo by Jon SooHoo/UPI | License Photo

"Anthony Hitchens got hit in the ribs with a helmet. We will see how he does as we go forward," Reid said.

Hitchens remained on the ground after the play while being tended to by the team's training staff. He walked back to the bench with assistance, but stopped twice along the way.

Wide receiver Tyreek Hill left the game with a strained groin, but he exited the locker room wearing an inflatable sumo wrestling costume for Halloween and showed no ill effects from the injury.

Chiefs linebacker Frank Zombo departed the game with a left hamstring injury. Left guard Cam Erving also left the game on the team's final drive, but Reid did not believe the injury is serious.

NFL // 19 hours ago
Raiders, Giants players latest to opt out of workouts due to COVID-19
April 16 (UPI) -- Members of the Las Vegas Raiders and New York Giants became the latest on a growing list of players to announce they will skip voluntary off-season workouts, citing the ongoing COVID-19 pandemic.

NFL // 3 days ago
'Unwanted' QB Sam Darnold stung by trade, vies to improve with Panthers
April 13 (UPI) -- Quarterback Sam Darnold said he was "stung" when he became "unwanted" and traded away by the New York Jets this off-season to the Carolina Panthers, but is now focused on self-improvement and learning a new offense.