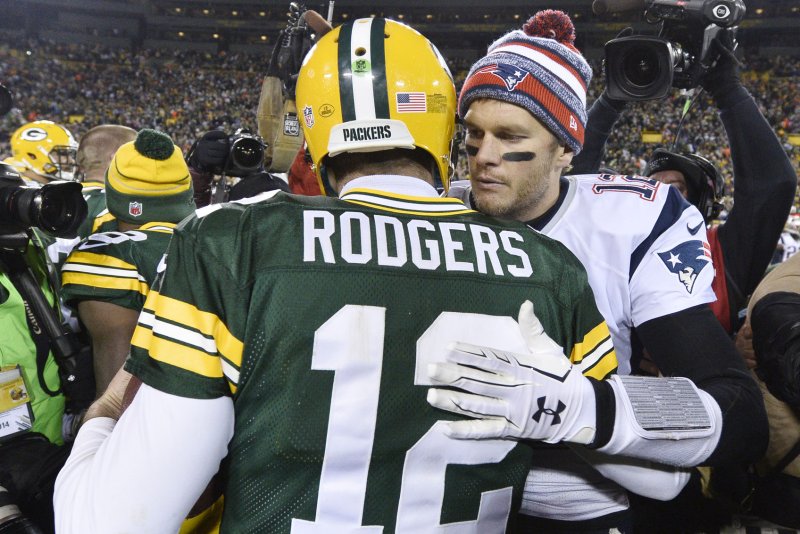 Oct. 29 (UPI) -- NBC used Michael Jordan to hype up an upcoming matchup between Tom Brady and Aaron Rodgers, prompting the question of which quarterback is better?

The Sunday Night Football on NBC Twitter account tweeted out a video of Jordan on Sunday night, teasing the matchup between the Green Bay Packers and New England Patriots which is set for 8:20 p.m. on Nov. 4.

Jordan appeared to be talking about NBA players, including LeBron James, during the tongue-in-cheek clip.

"A lot of talk going on these days about who is the greatest ever," Jordan said in the commercial. "About who has the titles, the raw talent, the most clutch moments. I get it. It's a tough call. I mean, even the jersey numbers are the same."

"But maybe the best way to settle this debate is to play it out head-to-head."

The clip then showed Rodgers and Brady highlights, spoiling the idea of a matchup between Jordan and James.

James retweeted the link early Sunday morning, joking that he was ready to take on "Air Jordan."

"I'm ready!! Oh my bad I thought, maybe you were, um never mind back to my regular schedule program," James tweeted.

IM READY!!!! Oh my bad I thought, maybe u were, umm never mind back to my regular schedule program https://t.co/4JmeesffNu

Sunday's meeting between Rodgers and Brady marks just the second time the two have faced off as starting quarterbacks. Rodgers' Packers beat Brady's Patriots 26-21 in their last matchup on Nov. 30, 2014 at Lambeau Field in Green Bay.

Broncos WR Demaryius Thomas says he has 50-50 odds at trade Brady, Patriots look to continue dominance of Bills Rams' Todd Gurley on not scoring: 'Forget fantasy and forget Vegas' Packers player on Ty Montgomery: 'They told him to take a knee'