Detroit Lions quarterback Matthew Stafford (9) warms up before a game against the New Orleans Saints on October 15, 2017 at the Mercedes-Benz Superdome in New Orleans. Photo by AJ Sisco/UPI | License Photo

Matt Prater made all four of his field-goal attempts for the Lions (3-3), including a 50-yarder right after the two-minute warning to seal the win for the Lions. His longest field goal this season up to that point had been 43 yards.

The Dolphins (4-3) had been one of the surprise teams early this season and have been hard to beat at home, winning 14 of their past 19 games.

Detroit racked up 457 yards of total offense, with 248 yards coming on the ground. That's the most a Lions team has rushed for in a game since 1997.

"We knew it was going to be a big challenge up front and I'm real happy for our guys," Detroit head coach Matt Patricia said, while quickly praising the blocking of the wide receivers and tight ends. "There definitely were some hidden blocks in there. Those guys have some of those blocks that are pretty difficult to make."

One week after the Miami offense compiled 541 yards, the Dolphins totaled 322 against the Lions. Brock Osweiler, playing for the injured Ryan Tannehill, was a pedestrian 22-of-31 for 239 yards and two touchdowns. He did not commit a turnover.

More of a problem for the Dolphins than their own offense was slowing down the Lions and their run game.

"We couldn't stop them -- that's just what it was," Miami head coach Adam Gase told reporters after the game. "They were executing better than us and we just didn't do enough to affect the quarterback."

He set the tone on the Lions' first possession, starting on his own 36-yard line and handing the ball off to Johnson. Five plays and 60 yards later, Stafford found Roberts for an early Detroit lead. Roberts missed the last three games with a knee injury.

While Johnson and the Lions' run game gashed the Dolphins' defense, Detroit bottled up the Miami ground game.

Frank Gore was held to 29 yards on 10 carries. Kenyan Drake scored on a 54-yard run around the left side, but the Detroit run defense stiffened.

Despite being dominated on the ground and struggling on offense, the Dolphins still had a chance to pull off the win after Danny Amendola snagged a 24-yard touchdown pass from Osweiler with six minutes left to cut the deficit to 29-21.

Stafford got the ball and milked more than four minutes off the clock to set up Prater for his game-clinching field goal.

Miami lost leading receiver Albert Wilson to a leg injury in the second quarter. The injury could sideline Wilson -- who has 26 receptions for 391 yards and four touchdowns -- for some time, but Gase did not want to speculate.

"I'm not sure yet, but there's a lot of guys at the end of the game who were trying to make stuff up and figure out a way to get back in the game," Gase said.

Wide receiver Kenny Stills also was seen limping on the Miami sideline after crashing into a security guard on a touchdown reception in the second quarter.

The Dolphins travel to Houston for a Thursday night date with the Texans while the Lions entertain Seattle next Sunday. 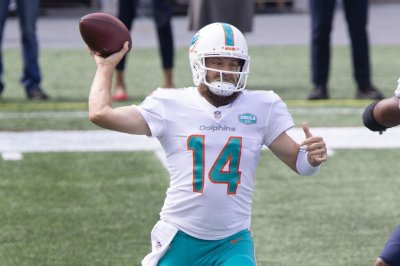