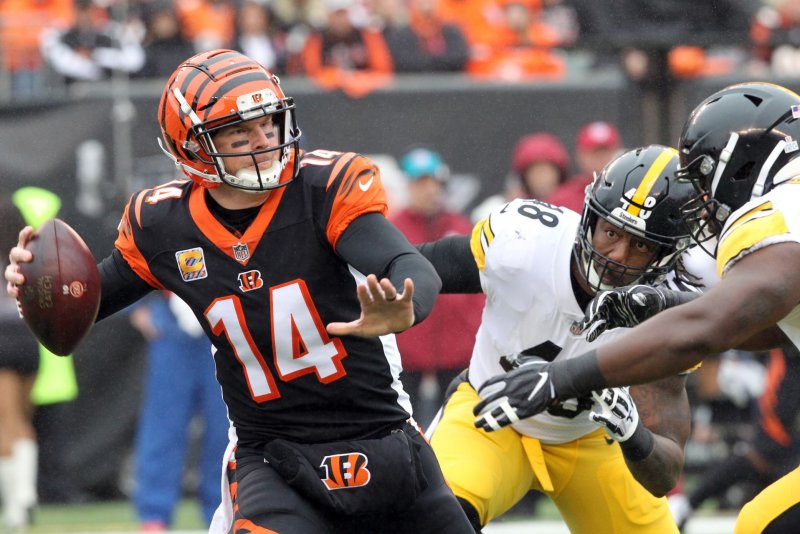 Cincinnati Bengals quarterback Andy Dalton (14) throws while under pressure from the Pittsburgh Steelers defense during the first half of play on October 14 at Paul Brown Stadium in Cincinnati. Photo by John Sommers II/UPI | License Photo

Aaron Rodgers, Derek Carr, Ben Roethlisberger and Russell Wilson should be removed from Week 7 lineups as their teams are serving byes.

My rankings this week include some upward trending players and some guys to avoid, despite the pool being watered down.

If you are needy at the position -- or looking for a streaming option -- check out my top waiver wire add/drops for Week 7.

Here are my top 20 options at the position this week.

Mahomes leads the league with 18 passing scores against just four interceptions. The MVP candidate has thrown for at least 300 yards in each of his last five games. He also averaged three touchdown passes per game and has two rushing scores. You don't need any more reasons to start Mahomes, but he has a great matchup in Week 7 against the Cincinnati Bengals. The Bengals are allowing the seventh-most fantasy points to opposing quarterbacks this season. Mahomes could be a matchup winner in Week 7.

Goff and the Los Angeles Rams should roll over the San Francisco 49ers in Week 7. The Rams gunslinger did not throw a touchdown pass in Week 6 for the first time this season. He also completed just 14 passes against the Denver Broncos. I'm expecting a big rebound for my No. 2 quarterback for Week 7 against the 49ers, a unit allowing the sixth-most fantasy points to opposing passers.

Dalton is my No. 5 quarterback for Week 7 with a matchup against the Chiefs, a unit that has allowed the most passing yards in the league. The Chiefs are also allowing the fifth-most fantasy points to opposing quarterbacks. The Cincinnati Bengals gunslinger has thrown multiple touchdown passes in five of his six starts this season. He has also thrown at least 40 passes in four of his last five starts. I expect the Bengals to be airing it out in this matchup while trying to keep pace with Mahomes and the Chiefs' offense.

Cleveland Browns rookie Baker Mayfield lands at No. 13 in my weekly rankings, meaning he can be used as a streaming starter if you are in a pinch. Mayfield has at least 40 passing attempts in each of his last three games. I expect another similar performance in Week 7 against the Tampa Bay Buccaneers, a unit allowing the most fantasy points to opposing quarterbacks. The Buccaneers are also tied with the Atlanta Falcons for allowing a league-high 16 passing scores.

Baltimore Ravens veteran Joe Flacco is another streaming candidate in deeper leagues. The Ravens quarterback has really been airing it out this season and has a Week 7 matchup against the New Orleans Saints, a unit allowing the third-most fantasy points to opposing quarterbacks. Flacco lands at No. 14 in my weekly rankings.

New York Giants quarterback Eli Manning is my No. 17 option for Week 7. Manning has a matchup against the Falcons, who are allowing the second-most fantasy points to opposing quarterbacks. I expect multiple touchdown passes and at least 250 passing yards from Manning in this spot. He is a dart-throw streaming option in Week 7.