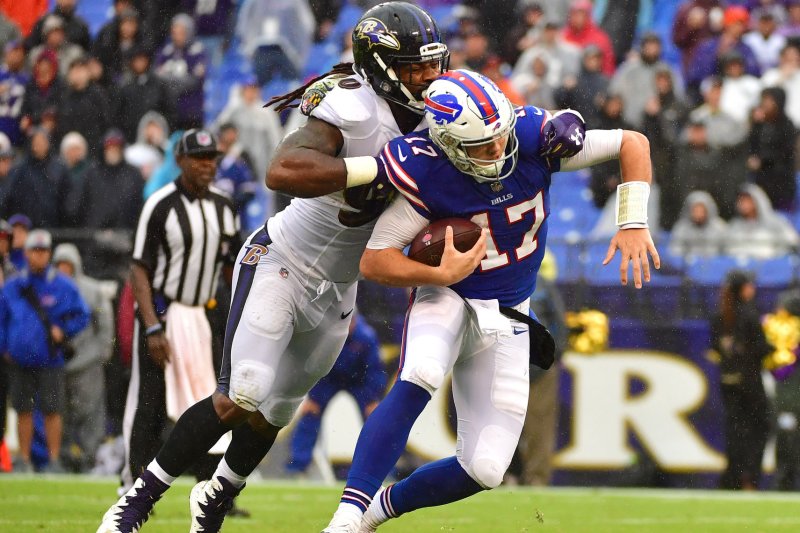 The Bills quarterback situation was already unstable before rookie Josh Allen went down with an elbow injury in the third quarter of Sunday's 20-13 loss in Houston.

On Monday, coach Sean McDermott said Allen would be "week-to-week" and that almost assuredly means, based on his previous description of injuries, that the struggling first-round pick won't be playing when the Bills visit the Indianapolis Colts Sunday.

"At this point, we'll leave it up to the docs and it's a week-to-week situation,'' he said, adding "we'll see" when asked specifically about Allen's chances for Sunday.

The options for the Bills, should Allen be unable to play, are second-year man Nathan Peterman and 14-year veteran Derek Anderson, who just signed with the team a week ago and is still trying to get up to speed on the Bills' playbook and get familiar with his new teammates.

Anderson was inactive in Houston, so Peterman came in when Allen got hurt. Peterman threw a go-ahead 16-yard touchdown pass to Zay Jones early in the fourth quarter, and also pieced together a possession that chewed up 6:32 on the clock before it stalled and the Bills punted.

From there, the Buffalo defense which had played great all day, faltered. It forced a Deshaun Watson fumble at the Texans 20 that may have iced a Bills victory, but the Texans recovered. Watson proceeded to march his team 84 yards to a game-tying field goal with 1:34 left.

And then, Peterman did what Peterman has often done when he has gotten the chance to play. He made a mistake that handed the game to Houston when he threw a pick-six to cornerback Jonathan Joseph with 1:23 to go.

Monday, McDermott continued to support the 2017 fifth-round pick who has now thrown nine interceptions in his 79 regular-season pass attempts across six games with three starts. In none of those six games has Peterman ever surpassed 80 yards passing. His career interception rate is now 11.4 percent, and his passer rating is 29.9.

"I can understand where that's coming from,'' McDermott said when he was asked how he could justify contining to play Peterman "I'm confident of every football player on our team. In respect to Nate, I know he had some good plays yesterday and some plays he'd like back, but I'm confident in every player on our team. Like I said, it's something we're working through. No. 1, I got to put the right guy out there that I feel is best for our football team. I understand the sentiment, but I need to do what's best for the team.''

Anderson has only thrown only eight passes since the end of the 2016 season. The 35-year-old has played in 76 career NFL games with 47 starts (20-27) and his career completion percentage is an uninspiring 54.1 with 60 touchdowns, 60 interceptions, and a passer rating of 71.1.

"He's a work in progress having just joined us,'' McDermott said. "It's the newness of the offense, the players he's working with, there's just familiarity and you build trust over reps together and so forth. That's part of the challenge.''

"You forget, Nate's a young player, too," he said. "He's only played a few games. Obviously, the production hasn't been there when he has played. But he's a very hard worker. He takes his craft very seriously. ... We need to continue to build him up and improve him and get him better."

In that vein, Daboll said it's possible Peterman is a player who will eventually bloom, though that's an awfully tough sell to Bills fans.

"I've been around a lot of young guys that have developed that maybe weren't where they wanted to be, whether it was year one, year two, after two starts, after five starts, after 16 starts," he said. "So as long as you have the right mindset in terms of improving and going out there and getting better every day and have a skillset, then you want to work with the player."

--QB Josh Allen suffered an elbow injury in the third quarter and was unable to finish the game. To that point he had completed 10 of 17 passes for 84 yards and rushed for 20 yards.

--QB Nathan Peterman relieved Allen and threw a go-ahead TD pass early in the fourth quarter, but then threw a game-losing pick-six with 1:23 left to play. Peterman finished 6 of 12 for 61 yards and later threw another interception that ended the game.

--WR Kelvin Benjamin his longest reception of the season, a 39-yarder in the third quarter, but he caught only one other pass in the game and finished with 43 yards receiving.

--G Vlad Ducasse is listed as day-to-day after suffering a knee injury against Houston.

Yankees acquire Jameson Taillon from Pirates for package of prospects