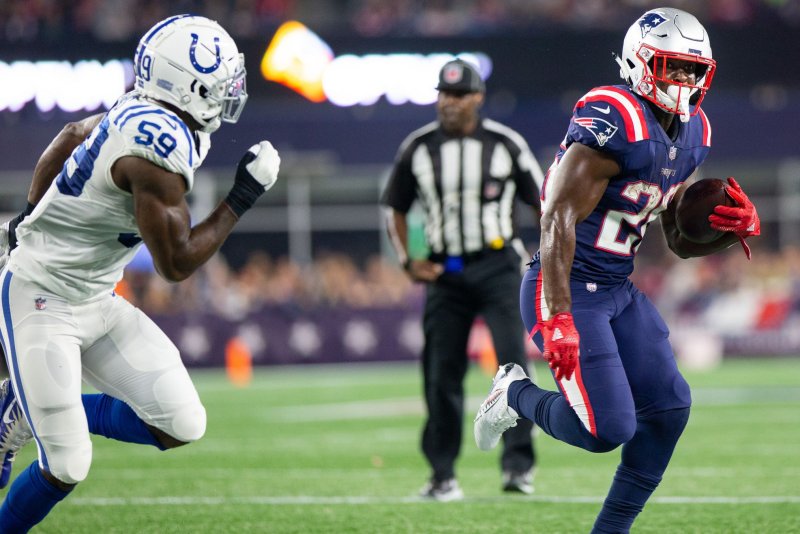 New England Patriots running back Sony Michel (26) is chased down by Indianapolis Colts defensive end Carroll Phillips (59) on a carry in the second quarter on October 4 at Gillette Stadium in Foxborough, Mass. Photo by Matthew Healey/UPI | License Photo

Christian McCaffrey, Joe Mixon, Sony Michel, Ezekiel Elliott and Jordan Howard are also in the top 10 of my weekly rankings

Don't forget to take Alvin Kamara, Mark Ingram, Kerryon Johnson, LeGarrette Blount and other New Orleans Saints and Detroit Lions players out of your lineups in Week 6, as those teams are serving byes.

Even though the pool is somewhat watered down due to those bye weeks and injuries, there are several emerging talents and players with great matchups in my Week 6 running back rankings.

If you are needy at the position, check out my waiver wire add/drops for Week 6.

Gurley obviously should never leave your lineup, regardless of matchup. This week the No. 1 running back in fantasy football has a matchup against the Denver Broncos, a unit that has allowed the second-most rushing yards to running backs this season. The Broncos have also allowed five rushing scores and the eighth-most fantasy points to the position. Start the Los Angeles Rams stud with confidence and expect fireworks.

Los Angeles Rams QB Jared Goff (R) hands off to Todd Gurley II in the third quarter against the Oakland Raiders on September 10 at the Coliseum in Oakland. Photo by Terry Schmitt/UPI

New England Patriots rookie Sony Michel is making the most of his opportunity, despite sharing the backfield workload with James White. Michel is my No. 8 option for Week 6, landing in RB1 territory with a matchup against the Kansas City Chiefs. The Chiefs are allowing the second-most fantasy points to running backs and Michel has gone for more than 100 yards from scrimmage and a touchdown in back-to-back games. Most encouragingly, he also has an average of 22 touches in his last two games.

Chicago Bears running back Jordan Howard is my No. 10 option at the position in Week 6, landing in RB1 territory in most formats. Howard's usage has not been overly encouraging but I expect a bounce-back performance in Week 6 against the Miami Dolphins, a unit allowing the sixth-most fantasy points to running backs through five weeks. He is a matchup dependent play and should be in lineups this week.

Seattle Seahawks running back Chris Carson is my No. 12 option at the position in Week 6, landing in low-end RB1 range. Carson missed Week 4, but has back-to-back starts with more than 100 rushing yards. In Week 5, he went off for 116 yards on 19 carries. He looks like the top guy in the Seahawks backfield and has shown an ability to produce when he gets the bulk of the carries. This week he battles the Oakland Raiders, a unit allowing the fourth-most rushing yards, tied for allowing the third-most rushing touchdowns and allowing the fifth-most fantasy points to opposing running backs this season.

Baltimore Ravens running back Alex Collins is a low-end RB2 for me this week against the Tennessee Titans, a unit allowing the sixth-most rushing yards this season to opposing running backs. The Titans have not allowed a touchdown to running back this season but that could change in this matchup as Collins has found the end zone in three of his five starts in 2018.

If you are looking to roll the dice at RB2 or flex in a deeper league, take a look at Tampa Bay Buccaneers rookie Ronald Jones. While Jones has been an inactive for most of the Buccaneers' games this season, he should start seeing more work as the other Tampa Bay running backs have underperformed. If there was a week to go off, this is it. The Buccaneers are facing the Atlanta Falcons, a unit that has allowed the second-most rushing scores and fourth-most fantasy points to opposing running backs. Jones fits just inside my rankings at No. 30, but I would only throw him into your lineup if you are desperate. He has a moderately high ceiling but a very low floor due to his unknown workload.