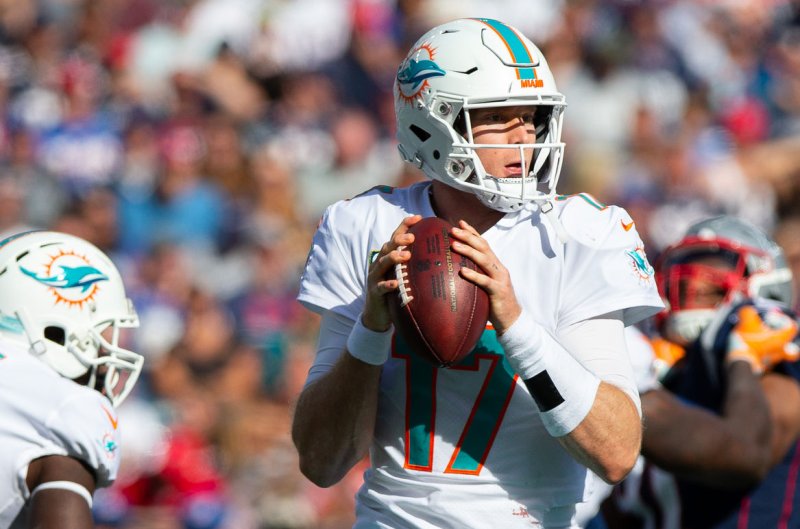 Miami Dolphins quarterback Ryan Tannehill (17) drops back for a pass in the third quarter against the New England Patriots on September 30, 2018 at Gillette Stadium in Foxborough, Massachusetts. Photo by Matthew Healey/UPI | License Photo

In a surprise move, the Miami Dolphins on Friday listed quarterback Ryan Tannehill as questionable for Sunday's home game at Hard Rock Stadium against the Chicago Bears because of a right shoulder injury.

Tannehill was limited in practice on Friday after putting in full practices on Wednesday and Thursday.

What caused the downgrade is unclear, as Tannehill's name or game status didn't come up earlier Friday during head coach Adam Gase's news conference with local reporters, according to team transcripts.

Tannehill absorbed a hard hit on the shoulder last week from a Cincinnati Bengals defensive lineman as he tried to throw a pass in the fourth quarter. The ball popped loose and was ruled a fumble, which resulted in the second of two touchdowns for the Bengals' defense.

The injury first occurred on a play in the second quarter against the Oakland Raiders in Week 3, when Tannehill was seen favoring the shoulder after being driven to the ground by Raiders defensive lineman Maurice Hurst, who received a personal foul penalty as a result.

The Dolphins (3-2) are set to face a stout Bears defense, which ranks second in the league in total defense, first against the run, eighth against the pass and second in sacks, and features pass-rushing ace Khalil Mack.

Should Tannehill not play, the Dolphins would turn to backup signal-caller Brock Osweiler, who was 2-0 against the Bears as a member of the Denver Broncos in 2015 and Houston Texans in 2016.

The 6-foot-4, 207-pound Tannehill has completed 85-of-129 passes this season for 972 yards and eight touchdowns with five interceptions.