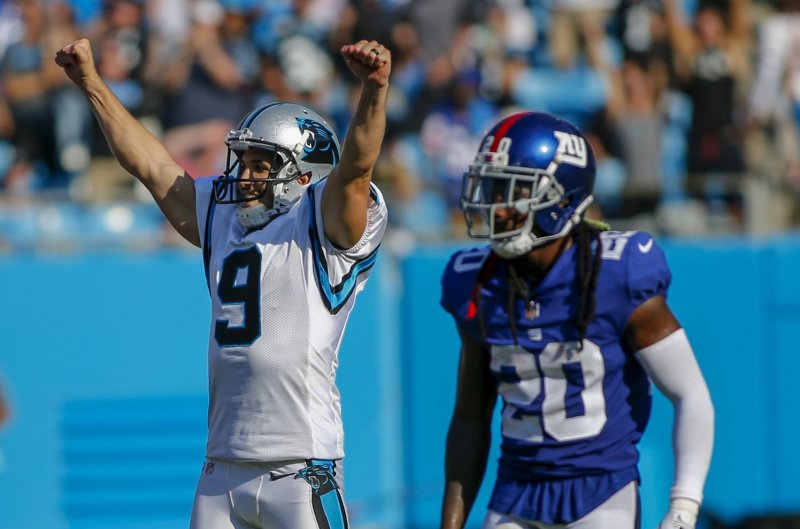 The New York Giants snapped their streak of 37 consecutive games without scoring 30 points Sunday, but it wasn't enough as Carolina Panthers kicker Graham Gano's 63-yard field goal with one second left in regulation lifted the Panthers to a 33-31 win.

The Giants, who fell to 1-4 with the loss, overcame a series of mistakes made by their own hands as well as some very questionable calls made by the Jerome Boger-led officiating crew to end a streak of 37 consecutive games without scoring 30 or more points on running back Saquon Barkley's 15-yard touchdown reception from Eli Manning with 1:08 left in the game.

In the end, the odds were stacked against them as Gano became the second kicker in as many seasons to hit a 60-plus yard field goal as time expired, sending the Giants home with a heart-breaking loss.

The Giants, as they have done in previous losses, kept things close at the half, battling to a 20-13 score after 30 minutes of play.

Besides two field goals by Aldrick Rosas, the first from 42 yards and the second from 53 yards, the Giants got the spark they were looking for from none other than receiver Odell Beckham Jr., who caught a pass from Manning and then chucked the ball 57 yards down the field to Barkley for a touchdown that made it a 17-10 game.

For the second week in a row, the Giants' special teams committed a major gaffe that cost the team. Whereas last week it was not defending a fake punt run by the Saints, this week it was failing to secure a live ball following a Panthers punt down by the Giants' end zone.

The loose ball was ultimately recovered by Carolina's Chris Jones in the end zone, the Panthers' second touchdown of the game, the first being a 25-yard touchdown reception by Curtis Samuel on their second drive of the game.

Things really began to get interesting in the second half after the Giants pulled to within four points following Rosas' 36-yard field goal in the third quarter. The Giants and Panthers traded interceptions, starting with Curtis Riley picking off Cam Newton with 3:44 left.

The Giants, however, gave the ball right back as Manning's short pass intended for Beckham was picked off by Mike Adams.

That's when questions about the officiating started to come into play. On the Panthers' scoring drive that culminated with a Newton to Christian McCaffrey 18-yard touchdown catch that made it 27-16 early in the fourth quarter, Giants safety Landon Collins was flagged for an unnecessary roughness penalty on a tackle attempt made on a 3rd-and-13 from the Panthers' 41-yard line.

The replay actually showed that it might have been Giants safety Michael Thomas who made incidental contact with his helmet, though on the play in question, Thomas appeared to be trying to slow his momentum in crashing into receiver Devin Funchess to avoid making helmet-to-helmet contact.

Still, that penalty gave the Panthers a fresh set of downs leading to McCaffrey's only touchdown of the game.

Following that score, the Giants and Panthers traded turnovers, but this time, the Giants managed to convert on cornerback Janoris Jenkins' interception of Newton, turning that into a 33-yard strike to Beckham.

That was Manning's longest pass of the season and his first touchdown completion to his top receiver that made it 27-24 following the two-point conversion.

On the next Panthers scoring drive, this one a 12-play, 54-yard affair that ended in Gano's 39-yard field goal to make it 30-24, Giants defensive end Kerry Wynn was flagged for a roughing-the-passer penalty that just happened to offset a holding call against Panthers tackle Chris Clark.

The Giants, not done fighting yet, got a little fourth-quarter magic from Manning, who systematically led them down the field on a four-play, 75-yard drive that ended with Barkley's second touchdown reception of the day, this one from eight yards out, a score that put them over the 30-point mark and gave them their first lead of the game since the first quarter.

That lead was short lived, however, as with 1:08 remaining, Newton marched the Panthers down the field to set up Gano's game-winning field goal, a kick that ties him for the second-longest field goal in NFL history. Jason Elam and Matt Prater both hold the league record with a 64-yard field goal.

"That was fun. I don't even think it's hit me," Gano said after the Panthers recorded their eighth straight win at home.

"I really don't think about a whole lot because I know the group in front of me is going to do its job well. We take a lot of pride in it. We practice it all the time and in pregame I'll try to back it up and kind of test my distance. I'm just very blessed to have that opportunity and to have the guys around me."

NFL // 1 hour ago
Chiefs' repeat third down vs. Bengals prompted by game clock error, referee says
Jan. 30 (UPI) -- A clock operator failed to stop the time late in the Kansas City Chiefs' AFC title game win over the Cincinnati Bengals, which led to a highly criticized decision to replay a third down, referee Ron Torbert said.

NFL // 13 hours ago
Chiefs down Bengals 23-20, advance to Super Bowl LVII
Jan. 29 (UPI) -- The Kansas City Chiefs have booked their spot in Super Bowl LVII, downing the Cincinnati Bengals at home 23-20 on Sunday night in a close AFC Championship game.

NFL // 5 days ago
FCC proposes $504,000 fine for Fox TV over fake emergency alert
Jan. 24 (UPI) -- A video promotion aired before a game between the New York Giants and Philadelphia Eagles on the Fox TV network in 2021 violated federal rules about mimicking an emergency alert, the FCC said Tuesday in proposing a $504,