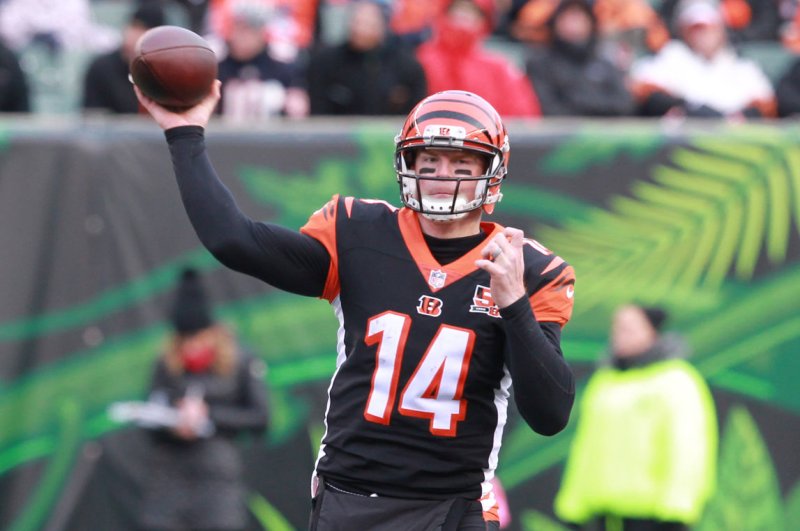 Cincinnati Bengals quarterback Andy Dalton (14) throws under pressure from the Chicago Bears' defense during the second half of play on December 10, 2017 at Paul Brown Stadium in Cincinnati. Photo by John Sommers II/UPI | License Photo

Cincinnati scored 27 straight points, including two defensive scores in the fourth quarter, and the Bengals beat the Miami Dolphins 27-17 on Sunday at Paul Brown Stadium in Cincinnati.

Andy Dalton completed 20-of-30 pass attempts for 248 yards and one very important touchdown that seemed to turn the tone of the game in favor of the Bengals.

With the Bengals (4-1) trailing 17-3 at the start of the fourth quarter, and many at Paul Brown restless and booing, Dalton flung the ball as he was falling down toward what seemed like a certain interception toward the end zone.

Running back Joe Mixon adjusted his body and swiped the ball and walked in for the Bengals' first touchdown of the day.

"Our guys did a nice job, whether it was pressure or holding or whatever," Bengals head coach Marvin Lewis told reporters. "We had blood in the water, and we went after it."

It didn't take long for the Bengals to tie the game after the Dolphins (3-2) received the ball on their next possession. On the fifth play, Michael Johnson intercepted a Ryan Tannehill pass and took it back 22 yards for Cincinnati's first defensive score of the quarter.

Tannehill was under pressure and his pass deflected off the helmet of Durham Smythe and into Johnson's hands.

Randy Bullock, who earlier kicked a 51-yard field goal, connected on a 20-yard attempt to give Cincinnati its first lead at the 3:30 mark.

The Bengals' defense sealed the game when Carlos Dunlap forced a fumble by Tannehill and rookie Sam Hubbard scooped up the loose ball and returned it 19 yards for another defensive score.

Tannehill finished 20-of-35 for 185 yards and one touchdown and two interceptions. Tannehill has struggled in two straight games and calls for his benching followed quickly after the game.

"Yeah. Yeah. Yeah," Dolphins head coach Adam Gase told the Miami Herald. "We just got to get a lot of things cleaned up. I mean, he's getting hit too much. I got to find a way to get the ball out of his hands -- either get the good guys open quicker or figure something else out.

"And in the run game we just have to look at a lot of things."

Miami had taken a 7-0 lead when Tannehill and Kenyan Drake hooked up for a 22-yard score midway through the second quarter.

Near the end of the half, Jakeem Grant returned a punt 71 yards and the Dolphins had a 14-0 lead at the intermission.