Niners may be without starting corners vs. Cardinals 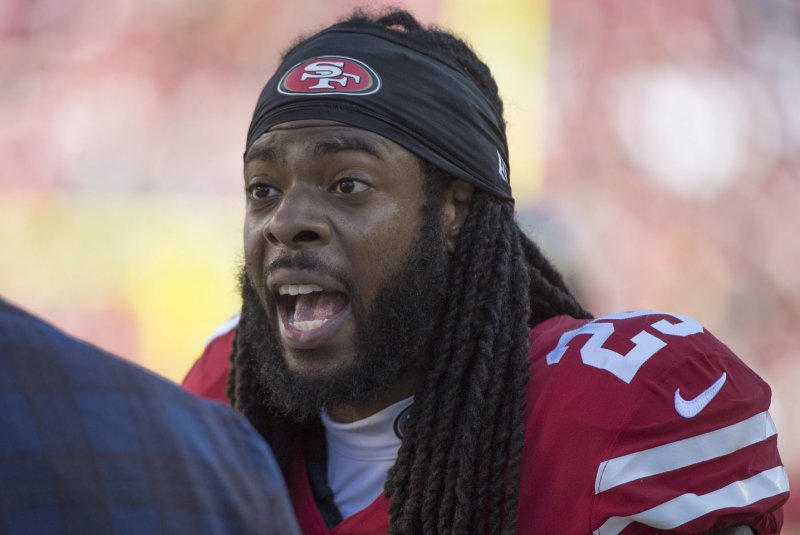 San Francisco 49ers cornerback Richard Sherman talks on the sidelines during a game against the Detroit Lions at Levi's Stadium in Santa Clara, California on September 16, 2018. Photo by Terry Schmitt/UPI | License Photo

The San Francisco 49ers could be without key players on both sides of the ball for Sunday's game against the visiting Arizona Cardinals.

Cornerback Jimmie Ward was unable to practice Friday after injuring his hamstring in Thursday's practice and was among seven San Francisco players listed as questionable for Sunday's matchup.

"He's had a history with it," 49ers coach Kyle Shanahan said of Ward's hamstring issue, per the San Francisco Chronicle. "We'll see how it feels Sunday."

San Francisco also could be without starting cornerback Richard Sherman, who was limited in practice Friday after sitting out last week's game against the Los Angeles Chargers due to a calf injury.

If both Ward and Sherman are unable to play Sunday, the 49ers will start Ahkello Witherspoon and Greg Mabin on Sunday against the winless Cardinals.

Ward has started two of four games this season, his fifth with the 49ers since the team selected him in the first round (No. 30 overall) of the 2014 NFL Draft.

Sherman was injured in a Week 3 loss to the Kansas City Chiefs and had his left foot in a walking boot after the game. Reports out of San Francisco on Monday indicated Sherman could miss two to three weeks.

The 30-year-old Sherman a three-year, $39 million free-agent contract with the 49ers in the offseason, two days after he was released by the Seattle Seahawks.

A torn Achilles suffered in November ended Sherman's final season with the Seahawks. Sherman also had surgery to remove bone spurs from his left ankle in the offseason.

Offensively, San Francisco also has issues at wide receiver. Marquise Goodwin (quadriceps/hamstring) was limited again in practice Friday and rookie Dante Pettis already has been ruled out due to a knee injury.

In addition, running back Matt Breida was limited in practice all week because of a shoulder injury. Breida leads the team with 313 yards rushing in his second season. Backup Alfred Morris practiced fully on Friday.

The offensive line is another sore spot for the 49ers. Center Weston Richburg and starting tackles Joe Staley and Mike McGlinchey were all listed as questionable on Friday's injury report due to knee injuries.

All three players were hurt in last week's loss to the Chargers, but only perennial Pro Bowler Staley was unable to return. Staley would be matched up against Arizona defensive end Chandler Jones, who has 3.0 sacks this season after leading the league with 17 in 2017.

"I know it means a lot to him," Shanahan said of Staley's desire to play. "I know he had a serious injury last week where I know he wanted to come back in the second half, but he couldn't. I know he's done everything this week to get himself ready to go."