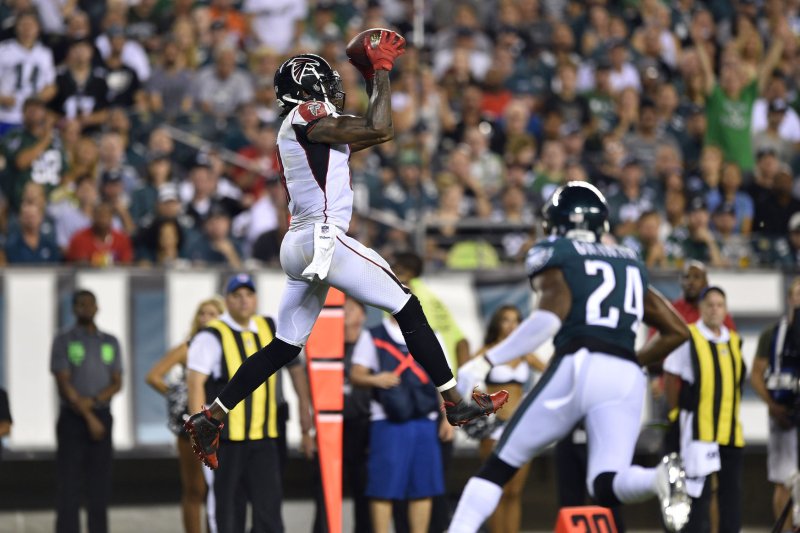 Atlanta Falcons wide receiver Julio Jones (11) makes a catch during the second half against the Philadelphia Eagles on September 6, 2018 at Lincoln Financial Field in Philadelphia. Photo by Derik Hamilton/UPI | License Photo

The Cincinnati Bengals visit the Atlanta Falcons at Mercedes-Benz Stadium in a head-on clash of focal points.

Dalton completed 74-of-116 passes for 860 yards in three games and is tied for third in the league with eight touchdowns. Ryan has completed 70-of-106 passes for 897 yards and seven touchdowns, but is hot as five of those passing scores came in a shootout against New Orleans last week, won by the Saints in overtime.

So, his arm is probably still warm.

But Falcons head coach Dan Quinn laments the team's inability to run the ball effectively puts too much of a load on Ryan.

Tevin Coleman was limited to 33 yards on 15 carries, a week after he went for 107 yards. Ito Smith, who looked good in running for 46 yards against Carolina, ran it twice and lost six yards.

Tailback Devonta Freeman has missed the last two games with a knee injury and it is uncertain if he will play Sunday.

On the other side of the ball Sunday, the Bengals hope they return to the more efficient run defense that helped them begin the season with a 2-0 record. But last week the Carolina Panthers collected 230 yards rushing on 41 carries. The tone was set on the Panthers' first touchdown drive, the final 64 yards of which was on the ground, including one 45-yard jaunt by elusive Carolina running back Christian McCaffrey.

Bengals head coach Marvin Lewis expects a different type of ground game from the Falcons, who are not as diversified on the ground. Well, unless they analyze films of the Panthers game.

"We have to go back and look at the film and figure out how we can fix that because you know, it's a copycat league," Lewis said. "Those same plays will come up later. We just got to put it to bed."

All that talk about rushing and rushing defense notwithstanding, the NFL is a passing league and both teams can do that well.

The Falcons have been unable to get any consistent heat on the quarterback the last two weeks (Cam Newton, Drew Brees) and will need to do better in that regard against Dalton. With at least three starters out (and likely more), Atlanta will need to get an effective pass rush from Vic Beasley Jr., who picked up his first sack last week, and Grady Jarrett.

Dalton is generally underrated by most opponents despite winning 58.9 percent of his starts, best in franchise history. This season, he has completed 63.8 percent of his throws and only been sacked four times in three games. However, Dalton has already been intercepted five times.

Cincinnati third-year wide receiver Tyler Boyd is off to a strong start and was probably player of the game in an otherwise disappointing loss at Carolina. For the second straight game, he matched a career-high with six receptions and set a career-best with 132 yards. Boyd leads the Bengals with 249 receiving yards and his 15 catches are second on the team.

For Atlanta, the emergence of rookie wide receiver Calvin Ridley the last two weeks has helped spark the offense. Ridley was hardly used in the season opener at Philadelphia. He has been a key part of the game plan the last two weeks.

Against the Saints, Ridley caught seven passes for 146 yards and three touchdowns. He pulled in a career-long 75-yarder for a score and became the first Atlanta rookie to catch three touchdown passes in a game and the seventh player in franchise history to do so.

"One of the things that jumps out is the speed he practices with," Quinn said. "He's one of the two fastest players at practice. It allows him to run routes at full speed and the timing you're seeing with him and Matt is because of the way he works."

Ridley has seen how fellow Alabama alum Julio Jones goes about his business and is right there with him.

"From the time he got here, the work that he puts in on the practice field, like he constantly empties the bucket to get ready," Quinn said. "He does not cut corners."