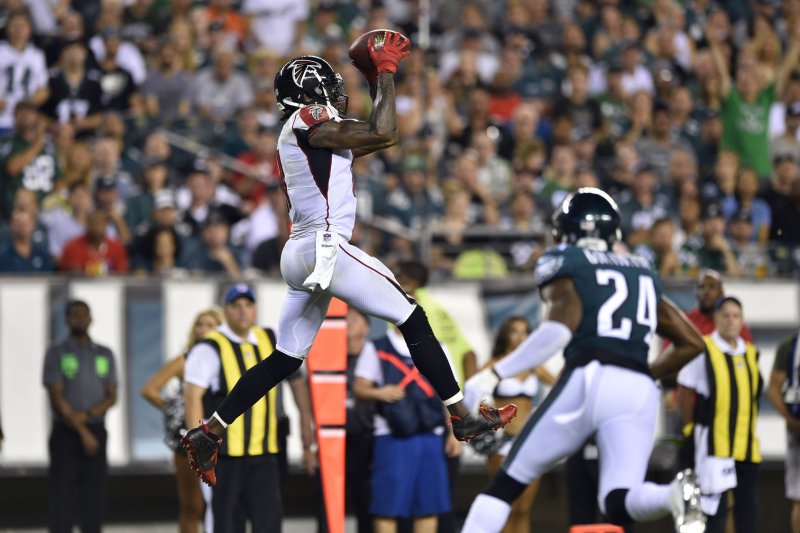 Atlanta Falcons wide receiver Julio Jones (11) makes a catch during the second half of an NFL game against the Philadelphia Eagles on September 6 at Lincoln Financial Field in Philadelphia. Photo by Derik Hamilton/UPI | License Photo

If you don't have the most elite players at the position, there are still plenty of wide receivers with great matchups in Week 3. There are also some young talents working their way up the list after big performances to kickoff their 2018 campaigns.

You can also check out my top add/drops from the waiver wire for Week 3 if you are needy at the position.

Jones is an obvious must-start every week, but I forecast a ton of work for the Falcons star in Week 3 against the Saints. The Falcons' top target has the third-most targets in the league, trailing only Brown and Thomas. Jones had 10 catches for 169 yards in Week 1 and had five grabs for 64 yards in Week 2. The Saints have allowed the most fantasy points and yards to opposing wide receivers this season. All signs point to a huge day from Julio.

Minnesota Vikings wide receiver Stefon Diggs celebrates after scoring the game winning touchdown against the New Orleans Saints in the second half of the NFC Divisional round playoff game on January 14 at U.S. Bank Stadium in Minneapolis. Photo by Kamil Krzaczynski/UPI

Minnesota Vikings wide receiver Stefon Diggs is my No. 6 option at the position for Week 3. Diggs went off in Week 2 for 128 yards and two scores on nine catches. He also scored in Week 1. I love him in Week 3 against the Buffalo Bills, who have already allowed a league-high six touchdowns to opposing wide receivers. Diggs is a WR1 until further notice.

Jacksonville Jaguars wide receiver Keelan Cole is my No. 30 wide receiver for Week 3. Cole had the catch of the year -- so far -- in Week 2. But that shouldn't blind you from seeing how good of a season he is having. Cole turned three catches in 54 yards in Week 1, but had his coming out party in Week 2 with seven catches for 116 yards and a touchdown. He is a low-end WR2 in deeper leagues for me against the Tennessee Titans. The Titans have allowed the second-most fantasy points and yards to opposing wide receivers this season and allowed the fourth-most touchdowns to the position in 2017. Cole should stay in your lineup while hot, especially when he has a matchup like this one.

DeSean Jackson should not be anywhere near your bench right now. The speedster is the second-highest scoring fantasy football wide receiver through two weeks. Ryan Fitzpatrick is playing as hot as it gets at the quarterback position. Jackson went off for 146 yards and two scores on five catches in Week 1. He followed that with a 4-catch, 129-yard performance in Week 2, featuring a 75-yard touchdown. Based on his history of inconsistency, a drop-off is coming soon. But you should enjoy the ride of top-end production while it lasts. Jackson is my No. 31 option for Week 3 as he faces the Pittsburgh Steelers. The Steelers have allowed four touchdowns to opposing wide receivers this year and I think more "Fitz-Magic" is on the way for the Buccaneers in Week 3.

John "Smokey" Brown is my No. 39 option this week at wide receiver. The Baltimore Ravens pass catcher appears to be Joe Flacco's top option. Brown scored in each of the first two games to begin his 2018 campaign. This week he goes up against the Denver Broncos and I'm expecting WR3 production. Brown is worth a shot in your lineup if you are weak at the position and are playing in a deeper league.

Pierre Garcon is my No. 42 wide receiver for Week 3, putting himself in the streaming category if you need help at the position. The San Francisco 49ers pass catcher faces the Kansas City Chiefs this week, a defense allowing the fifth-most fantasy points this season to opposing wide receivers.