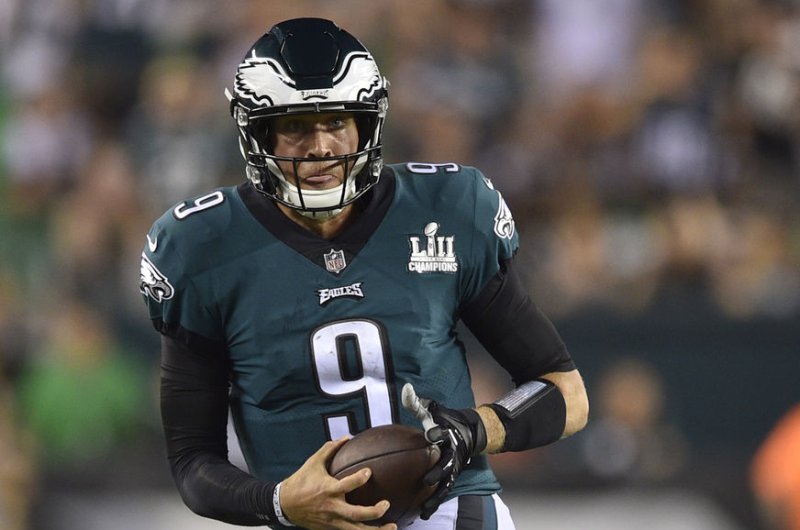 Philadelphia Eagles quarterback Nick Foles (9) looks up field after catching the ball during the second half against the Atlanta Falcons on September 6, 2018 at Lincoln Financial Field in Philadelphia. Photo by Derik Hamilton/UPI | License Photo

A pair of backup quarterbacks with decorated resumes will be out to send their respective teams to a 2-0 record to start the season.

Nick Foles, who is the reigning Super Bowl Most Valuable Player, leads the Philadelphia Eagles (1-0) into Raymond James Stadium to face Ryan Fitzpatrick and the Tampa Bay Buccaneers (1-0) on Sunday (1 p.m. ET).

Wentz, who has not been cleared for contact, watched Foles step in and play superbly in the team's championship run last season.

Foles, however, sputtered throughout the preseason and labored in Philadelphia's 18-12 victory versus the Atlanta Falcons on Sept. 6. The 29-year-old completed 19-of-34 passes for only 117 yards with an interception versus the Falcons.

Fitzpatrick endured no such struggles as he made the season-opening start in place of the suspended Jameis Winston. Fitzpatrick was named the NFC Offensive Player of the Week by the NFL after throwing for four touchdowns and rushing for another in the Buccaneers' 48-40 victory versus the New Orleans Saints on Sunday.

The 35-year-old Fitzpatrick threw for a career-best 417 yards and also rushed for 36 more in the offensive slugfest.

"I think what happens with backup quarterbacks is they're seeing the game from a distance, they're seeing it from afar as a backup," Pederson said. "The starter is getting all the reps, they're playing on Sundays and the backup is processing all this information and just basically saying, 'Hey, if given the opportunity, I'm going to do it the same or do this.'

"And I think that's the case with both Nick and Ryan. They've studied the game for so long. They're veteran players. They've started and played in this league, too, and you can't discount that. I think that and having the ability to process all that information, given the opportunity on the field, you can see what Ryan Fitzpatrick can do. You know what Nick Foles can do. And I think it's just a credit to them for their preparation throughout the years and how they get themselves ready for game day."

Fitzpatrick tossed a pair of touchdown passes to former Eagles wideout DeSean Jackson (five receptions, 146 yards) and one each to Mike Evans (seven catches, 147 yards) and Chris Godwin. Jackson has been slowed this week while dealing with a concussion and shoulder injury, but was able to practice on Thursday.

Jackson's availability aside, Eagles safety Malcolm Jenkins knows his team's secondary has a tall task on its hands.

"Before you even turn on the tape, you see the points they put up from [Sunday]," Jenkins said. "It catches your eyes and is definitely impressive when you start seeing the big plays that they had. Those are things you have to prepare for. We know they're a team that likes to take shots down the field. Fitzpatrick is a quarterback that likes to take chances and throw into coverage because they have receivers that can make plays."

Fitzpatrick, in turn, is keenly aware of what the Eagles' secondary brings to the table. After all, he's faced them five times (1-3-1) with five different teams during his career.

"I think the thing that you see right away when you turn on the tape with this [Eagles] defense is they play so fast, flying around, having fun, they have swagger about them that shows up even on the player/coaches tape we watch," Fitzpatrick said. "This is a defense you love watching play and hate to go against us because how fast and physical they are."

Philadelphia's defense will also receive a boost in the form of Nigel Bradham, who sat out the season opener as he served a one-game suspension for violating the NFL's personal conduct policy. Bradham will join fellow linebacker Jordan Hicks, who had seven tackles and a career-high 1.5 sacks versus the Falcons.

On the other side of the ball, running back Jay Ajayi overcame a sluggish start to record his second career two-touchdown performance in the season opener.

Foles' most trusted target against the Falcons was Nelson Agholor, who reeled in a team-high eight receptions -- albeit for just 33 yards.

Tight end Zach Ertz dropped a pair of passes in the opener, but that did little to dim the confidence level in both Foles and offensive coordinator Mike Groh.

"He had a couple that he usually makes, and it's uncharacteristic," Groh said of Ertz. "We're going to keep feeding him. Nothing is going to change there."

Philadelphia's passing game will look to exploit a Tampa Bay secondary that saw the Saints roll up 439 yards through the air and three touchdowns.

The Buccaneers lost another starter in the secondary this week when they placed cornerback Vernon Hargreaves on injured reserve with a torn labrum. The 23-year-old Hargreaves was injured while attempting to break up a pass intended for New Orleans running back Alvin Kamara in the fourth quarter.

Four-time Pro Bowl selection Brent Grimes remains uncertain for Week 2 as he deals with a groin injury that he sustained in practice last week.

The injuries likely will force rookie cornerbacks Carlton Davis and M.J. Stewart to have bigger roles this week.

The Buccaneers also could be without defensive end Jason Pierre-Paul, who was able to practice on Thursday despite nursing an injured right knee.