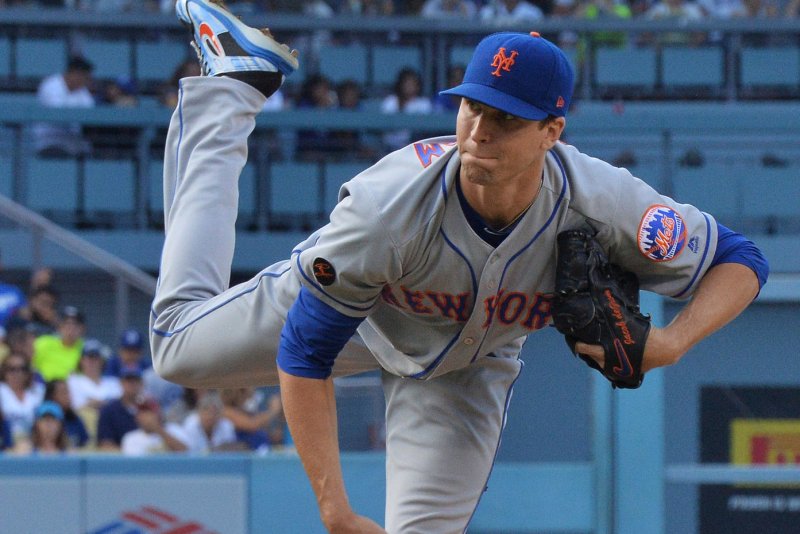 NEW YORK -- Mother Nature impacted both the New York Mets and Miami Marlins on Sunday afternoon. Chances are the Marlins will still be feeling the effects of a rainy Sunday on Monday night.

Mets ace Jacob deGrom, who was scratched due to a rainy forecast Sunday, is scheduled to take the mound in the opener of a four-game series against the visiting Marlins at Citi Field.

DeGrom (8-8, 1.68 ERA), who leads the majors in earned run average, will oppose Marlins rookie right-hander Jeff Brigham, whose second big league start was pushed back when Miami's game against the host Pittsburgh Pirates was rained out Sunday.

The Mets did get their game following a 27-minute delay prior to first pitch Sunday, when Corey Oswalt started in deGrom's place and New York came back to beat the Philadelphia Phillies, 6-4. The teams played through a constant rain, though there were no further stoppages.

"We knew we were going to get delayed and we knew the outlook wasn't great and we were kind of going back and forth on what we needed to do," Callaway said. "We decided to push it back until tomorrow."

The Mets (65-77) pushing back deGrom means the Marlins (56-86) get to face a record-breaking National League Cy Young Award contender instead of originally scheduled Monday starter Jason Vargas, whose 6.75 ERA was the third-highest in the majors entering Sunday amongst pitchers who have thrown at least 70 innings this season.

DeGrom endured yet another hard-luck no-decision in his most recent start last Monday, when he allowed one run on two hits over six innings in the Mets' 4-2 victory over the Los Angeles Dodgers. It was the 25th straight start in which deGrom allowed three runs or fewer, which tied the all-time record set by Leonard Cole of the Chicago Cubs in 1910, as well as his 20th straight quality start, which broke the Mets record set by Hall of Famer Tom Seaver in 1973.

While deGrom's win total pales in comparison to his Cy Young competitors -- the Washington Nationals' Max Scherzer and the Phillies' Aaron Nola rank first and second in the NL with 17 and 16 victories, respectively -- he is more than half a run ahead of Nola (2.29) and Scherzer (2.33) in ERA.

The Marlins will hope Brigham's second outing goes better than his first. Brigham took the loss in his major league debut Sept. 2, when he gave up three runs over three innings as Miami fell to the Toronto Blue Jays, 6-1.

"Talking with (catcher) Chad (Wallach), he had never seen him all over the place like that," Mattingly said "So hopefully, it's one we get out of the way and next time out, he settles down and we get more like what we think we have."