Eagles' Jay Ajayi: Carson Wentz will play as soon as doctors clear him 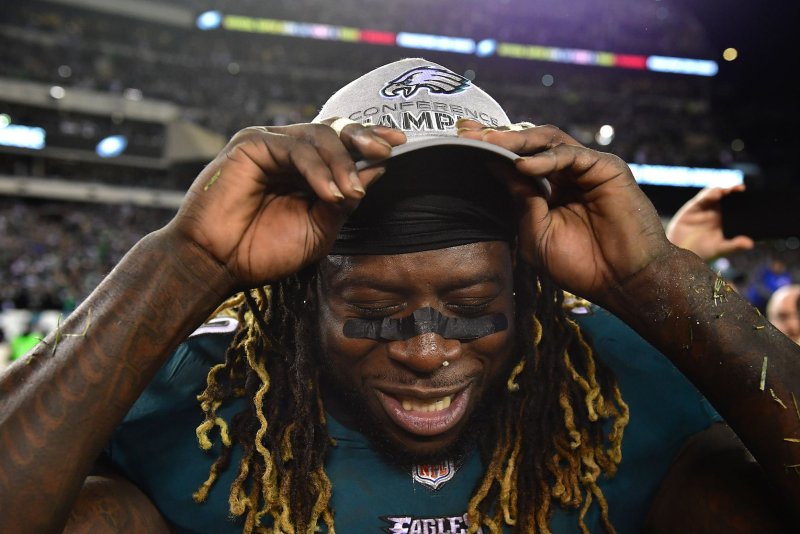 Philadelphia Eagles running back Jay Ajayi celebrates after the Eagles defeated the Minnesota Vikings 38-7 to win the NFC Championship on January 21 at Lincoln Financial Field in Philadelphia. Photo by Kevin Dietsch/UPI | License Photo

Philadelphia Eagles running back Jay Ajayi runs the ball during the fourth quarter of the NFC Championship against the Minnesota Vikings at Lincoln Financial Field in Philadelphia on January 21. Photo by Derik Hamilton/UPI | License Photo

Sept. 5 (UPI) -- Philadelphia Eagles star running back Jay Ajayi told UPI that he hopes he's ready to play on Thursday and that quarterback Carson Wentz will play as soon as he is medically cleared.

Ajayi joined the Eagles via trade in October and went on to win a Super Bowl with the squad in February. He enters the 2018 season as the team's lead back, but is expected to share passing down work.

Foles, the Super Bowl MVP, will start for the Eagles on Thursday when they take on the Atlanta Falcons in the first game of the NFL season. Wentz is still recovering from knee surgery and has yet to be medically cleared for contact.

"We have both of them out there at practice," Ajayi told UPI. "I don't even think Carson has been cleared by the doctors anyway yet ... It doesn't really matter what he wants. As soon as he can do that, then he'll get out there."

Eagles right tackle Lane Johnson told reporters last week that Wentz looked "ready" for Week 1 and that he would be surprised if the 2017 MVP candidate didn't get the nod for the Falcons game.

Ajayi said he will go with whoever is under center and everyone is doing their respective jobs. But the Eagles obviously have a lot of confidence in Foles.

"I respect Nick a lot," Ajayi said. "He has done a lot for Philadelphia and for our team and I appreciate him being here again for another year and having him as our quarterback."

Eagles coach Doug Pederson told reporters Tuesday that Wentz is "probably disappointed" that he can't be out with the team for Week 1.

"Carson is in a great spot," Pederson said. "He's in a great spot right now. He's supportive. He understands. He knows exactly where he's at. He works every single day to get back on the field. That's all I can ask for."

Ajayi returned to practice on Monday after sitting out for two weeks with a foot injury. But the 2016 Pro Bowl selection said he is working hard to be in good enough shape to suit up against the Falcons.

"I'm just listening to our trainers and our coaches and doing whatever I need to do to be able to play," Ajayi said. "So hopefully by game time ill be good to go."

With the departure of LeGarrette Blount, the lead role in the Eagles' backfield has Ajayi's name on it. He was touted as a "bell-cow" when he played for the Miami Dolphins, but is willing to do whatever is asked by his coaches in Philadelphia.

Ajayi had just 408 yards and a score on 70 carries in seven games for the Eagles last season after coming over from the Dolphins.

"Well I look at myself as a guy that can do it all when called upon," Ajayi said. "Whatever the coaches want, that's what I'm going to do."

The four-year veteran is coming off of his first Super Bowl victory, but is trying to enter the season with a normal mindset.

"Obviously it's special, but for me I'm looking at it as another season, not as coming in as Super Bowl champs," Ajayi said. "It's just another year. Everyone is on the same level right now."

Looking for a Fan

Ajayi is a native of Britain and enjoys traveling overseas. He is also working with Courtyard Marriott in the search for a passionate NFL fan to serve as the first-ever Courtyard NFL Global Correspondent.

Fans can submit a video showing off their fandom experience, knowledge and passion for the NFL for the contest at CourtyardCorrespondent.com or in-person at Courtyard's NFL Kickoff experience in Philadelphia on Sept. 6th.

The contest winner will receive a season of international travel to major NFL events around the world, including games in London, Mexico City, Minnesota and Atlanta, for Super Bowl LII.

"It will be cool to see what those videos look like and how crazy these passionate fans are out there," Ajayi said.