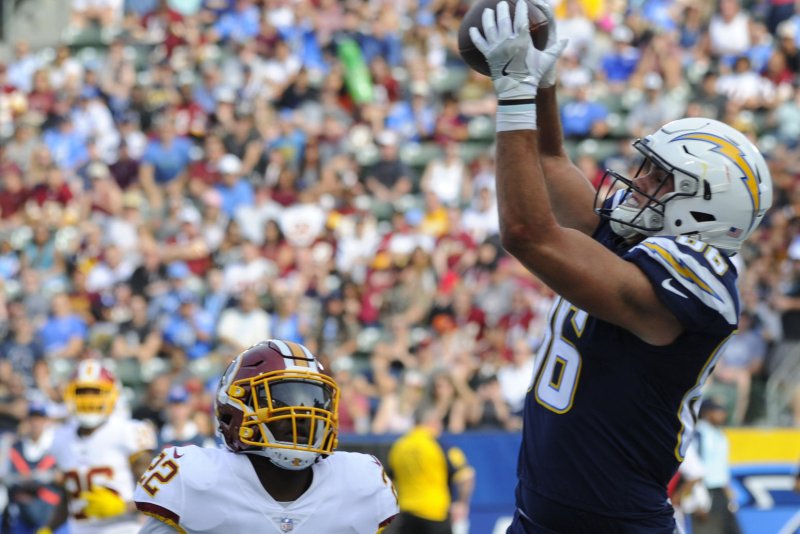 Los Angeles Chargers tight end Hunter Henry catches a pass for a touchdown in the first half against as Washington Redskins' Deshazor Everett watches on December 10 at StuHub Center in Carson, Calif. Photo by Lori Shepler/UPI | License Photo

The Los Angeles Chargers placed Hunter Henry on the physically unable to perform list -- as opposed to injured reserve -- as the tight end bids to make a recovery from the torn ACL he sustained in May.

Henry will become eligible to return to practice after the sixth week of the season. The Chargers then will have a three-week window to either activate the 23-year-old Henry or shut him down for the remainder of the campaign.

The ACL tear Henry sustained, however, is typically considered a season-ending injury.

Tight ends Virgil Green, who was signed to a three-year, $8.6 million deal this offseason, and Sean Culkin are on the roster for the Chargers, who initially entertained the option of bringing back Antonio Gates.

Henry, who was expected to be a focal point of the Chargers' offense in 2018, injured his right knee while running downfield on the first day of organized team activities.

The transition from Gates to Henry started in 2016 when the club used a second-round pick on the Arkansas product. Henry recorded 45 receptions for 579 yards and four touchdowns in 14 games in 2017 before a lacerated kidney ended his season.

Considered a lock for the Pro Football Hall of Fame, Gates had a reduced role with the Chargers in 2017, playing 478 snaps and making 30 receptions for 316 receiving yards and three touchdowns.

An eight-time Pro Bowl selection and three-time All-Pro, Gates is the Chargers' all-time leader in receptions (927), receiving yards (11,508) and touchdowns (114), with his touchdown total an NFL record for tight ends.

Gates has caught 87 touchdown passes from Philip Rivers, the most in league history for a quarterback-tight end tandem.

He also has 21 games in his career with more than 100 receiving yards, one of only seven tight ends to achieve that feat.