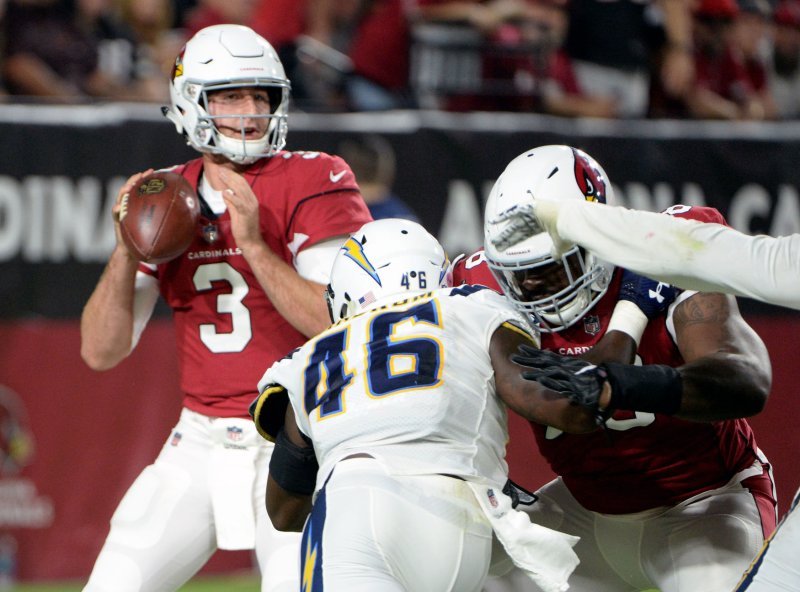 Arizona Cardinals rookie quarterback Josh Rosen looks to pass in the second quarter of a preseason game against the Los Angeles Chargers at University of Phoenix Stadium on August 11, 2018. Photo by Art Foxall/UPI | License Photo

Barring a late trade, the Arizona Cardinals will go into the season with three quarterbacks on the roster.

Glennon signed a two-year contract with the Cardinals in March, agreeing to terms on the same day Bradford was signed to a one-year deal.

With Bradford's long injury history, Arizona apparently wasn't willing to go into the season with Rosen as the lone backup. Rosen was selected with the 10th overall selection in this year's NFL Draft.

Glennon, a former third-round pick of Tampa Bay in 2013, certainly didn't hurt his chances in the Cardinals' preseason finale against the Denver Broncos on Thursday night.

Making the start with Bradford and Rosen sitting out, Glennon played the first half and completed 8 of 10 passes for 69 yards and a 2-yard touchdown pass to Greg Little.

"When he had time to go through his progressions, he was precise," Arizona coach Steve Wilks told reporters after the game. "He did some good things."

Glennon also has ample experience, starting 22 of his 25 NFL games with Tampa Bay and the Chicago Bears. He signed a three-year, $45 million contract with the Bears in March 2017 but lasted only four games as the starter before losing the job to rookie Mitch Trubisky.

Last season, Glennon finished 93 of 140 (66.4 percent) for 833 yards, four touchdowns and five interceptions with three lost fumbles. For his career, he has passed for 4,933 yards and 34 touchdowns with 20 interceptions.