Houston announced the transactions on Tuesday. Jones, 23, entered the NFL as an undrafted free agent signing by the Texas after the 2017 NFL Draft. He had six tackles and a pass defensed during the 2017 preseason and spent the 2017 season on the Texans' practice squad.

The 6-foot, 180-pound defensive back played collegiately at Boston College and the University of Akron.

Houston worked out cornerbacks Zack Sanchez and Teddy Williams, along with Jones, on Monday before the signing.

Thornton had two tackles and two passes defensed in the 2018 preseason for the Texans.

Houston has Jonathan Joseph and Kevin Johnson listed as its starting cornerbacks, with Johnson Bademosi and Aaron Colvin in second-string roles. Johnson suffered a concussion during the team's preseason win against the San Francisco 49ers on Saturday in Houston and had a brief hospital stay, but was at practice on Monday.

Texans coach Bill O'Brien told reporters that Johnson was "doing much better." He also said the team would be keeping an eye on the waiver wire for needs at the position.

"At the end of the day, we look at the waiver wire every day and we see what's out there, but you never bring in guys just to finish practice," O'Brien said. "You want guys that can come in here and have a chance to make the team, so that's what we're looking at."

The Texans practice on Tuesday, Wednesday and Thursday before facing the Los Angeles Rams at 4 p.m. on Saturday in Los Angeles in their third preseason game.

NFL // 22 hours ago
Jets QB Zach Wilson leaves Week 7 game with knee injury
Oct. 24 (UPI) -- Rookie quarterback Zach Wilson sustained a right knee injury in the second quarter of the New York Jets' loss to the New England Patriots on Sunday in Foxborough, Mass., and did not return to the game. 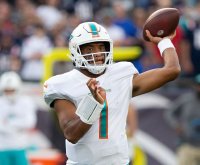