Colts' Luck: 'I'm sort of happy to get sacked by Suggs' 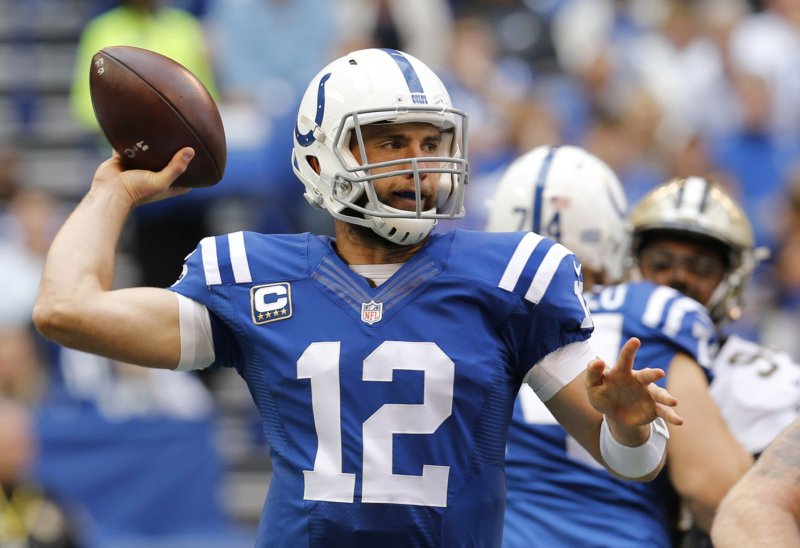 Indianapolis Colts quarterback Andrew Luck couldn't have been happier about getting reacquainted with linebacker Terrell Suggs during Monday's preseason game against the Baltimore Ravens.

Luck, after all, missed the entire 2017 season while rehabbing his surgically repaired shoulder.

The 28-year-old was no worse for wear after being on the receiving end of a blindside sack from Suggs, who immediately helped the quarterback off the turf.

"I told someone after the game, 'I'm sort of happy to get sacked by Suggs, a legit sack,'" Luck said. "I landed on my right elbow sort of reminiscent of how I injured my shoulder a couple of years ago (in Week 3 of the 2015 season). I didn't feel anything. Didn't give it a second thought. That's a big deal for me, being able to lose that thought bubble."

Luck said the first-team offense's performance was "sloppy" in the Colts' 20-19 loss, with the quarterback completing 6-of-13 passes for 50 yards with an interception during his five series.

"We turned the ball over, (and) my experience tells me that protection at times was not great," Colts coach Frank Reich said. "We just didn't find a rhythm for (Luck). I felt maybe there were one or two throws that weren't his best throws, but overall, it's usually not as bad as you think or as good as you think. Still have a confidence in a direction we're headed offensively."

Luck is headed to into his final preseason game on Saturday, when he'll play until about halftime against the San Francisco 49ers.

After starting all 16 games in each of his first three seasons and guiding Indianapolis to identical 11-5 records, Luck was limited to seven starts in 2015. He made 15 starts in 2016, throwing for 4,240 yards and 31 touchdowns versus 13 interceptions.

The Colts finished 4-12 in 2017 with Jacoby Brissett starting 15 games at quarterback. Recurring soreness in Luck's shoulder prompted the Colts to finally shut him down two weeks after he returned to practice in early October. He was placed on injured reserve on Nov. 2.