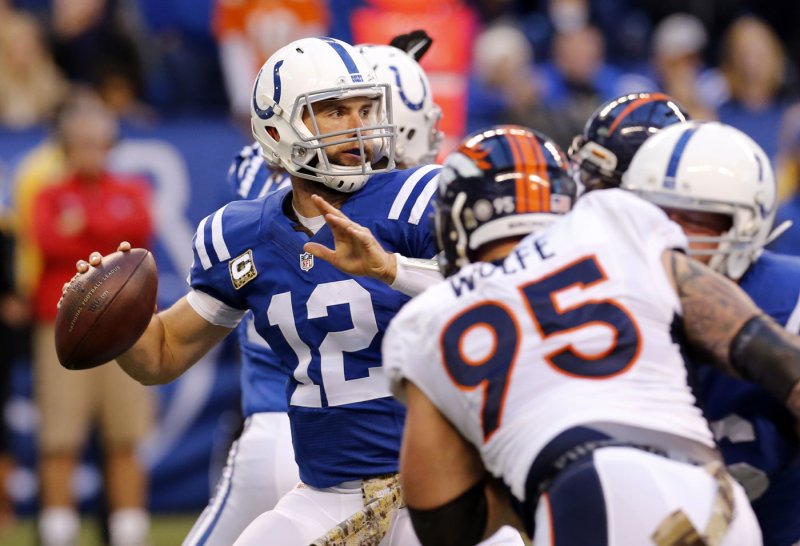 Indianapolis Colts quarterback Andrew Luck (12) throws under pressure during a game against the Denver Broncos in 2015. Photo by John Sommers II/UPI | License Photo

Indianapolis Colts quarterback Andrew Luck is expected to play one quarter in the team's preseason opener.

Colts coach Frank Reich told reporters that Luck needs the work after missing the entire 2017 season while recovering from shoulder surgery. Indianapolis opens the preseason against the Seattle Seahawks on Thursday.

"The plan is to play him a little bit more than he normally would if he'd had a normal year last year," said Reich, per Sports Illustrated. "He needs to get his snaps and maybe a little bit more. But I'm not gonna be dramatic with it."

Luck has said he does not feel any pain in the surgically repaired shoulder and has only dealt with the normal soreness and fatigue.

Colts owner Jim Irsay told The Indianapolis Star that he expects his franchise quarterback to be better than ever after sitting out a year.

"Trust me when I say this," Irsay said, "it's made him a better football player, and a better man, a guy in the end who is going to give us even a better chance for greatness.

"I really felt confident that this guy was going to be back on the field (last year). I, like many of our fans, didn't expect him to miss the season he missed. That was a surprise. A surprise to him, too."

Recurring soreness in Luck's shoulder prompted the Colts to finally shut him down two weeks after he returned to practice in early October. He was placed on injured reserve on Nov. 2.

--New York Giants wide receiver Odell Beckham Jr. is confident that he will reach agreement with the team on a long-term contract extension.

"It'll all work itself out," Beckham said Saturday during a media briefing, per NorthJersey.com. "Life always does."

Beckham is making his way back from a fractured ankle that limited him to only four games in the 2017 season. He is scheduled to make $8.459 million in the final year of his rookie contract.

Vaccaro worked out for the Titans on Friday, one day after the team learned that starting safety Johnathan Cyprien sustained a torn ACL and will miss the upcoming season.

Vaccaro, a first-round pick of New Orleans (No. 15 overall) in the 2013 NFL Draft, started 67 of 68 games in which he play for the Saints in his first five seasons.

Tavecchio replaced veteran Sebastian Janikowski in 2017 and made 16 of 21 field-goal attempts and 33 of 34 extra points. Tavecchio made 3 of 4 attempts from beyond 50 yards.

The left-footed Tavecchio was expected to be the Raiders kicker this season, but instead the competition for the job will be between Mike Nugent and Eddie Pineiro. Nugent signed a one-year deal with the Raiders on Friday, according to NFL Network's Tom Pelissero.

--Oakland Raiders cornerback Daryl Worley is likely facing discipline from the NFL after online court records revealed he pleaded guilty in June to three charges, including driving under the influence.

According to online court records from the First Judicial District Court of Pennsylvania, Worley pleaded guilty June 18 to three misdemeanor charges of DUI, carrying firearms in public in Philadelphia and resisting arrest. Three other charges, notably a felony charge of carrying a firearm without a license, were dropped.

--The Seattle Seahawks will bring in a number of veteran defensive players for workouts Sunday, multiple media outlets reported.

Defensive back Dominique Rodgers-Cromartie, defensive end Damontre Moore and linebackers Lamarr Houston and Erik Walden are scheduled to audition for the team, according to the NFL Network and ESPN.

Seattle had a major roster overhaul in the offseason, trading away defensive end Michael Bennett and releasing cornerbacks Richard Sherman and Jeremy Lane.

In addition, they could be without both starting safeties from a year ago. Earl Thomas continues to be a training camp holdout as he seeks a new contract and Kam Chancellor is walking away from the game due to a neck injury.

--New England Patriots rookie running back Sony Michel underwent a procedure to drain fluid from his knee after leaving practice Wednesday and is expected to be sidelined for at least 10 days, ESPN reported on Saturday.

According to ESPN, getting his knee drained is more a of a cleanup to address some pre-existing conditions. Michel's recovery could go beyond 10 days but is not expected to impact his availability for the regular season.

He was injured Wednesday in New England's sixth practice of training camp. He exited the field under his own power before going to the locker room.

Speaking to reporters in Richmond, Gruden refuted the initial report by NBC Sports Washington on Thursday. The news of Doctson's heel getting drained was tweeted by Brian Mitchell, a former Redskins kick returner and running back.

Doctson is recovering from a left shoulder injury he suffered in Wednesday's practice.

--Although Josh Gordon has yet to join the Cleveland Browns in training camp, GM John Dorsey reiterated the troubled receiver will return.

In a radio interview Friday with 92.3 The Fan in Cleveland, Dorsey said: "I told you all he would be here, and he will be here."

Dorsey did not give a timetable for Gordon's return. Gordon is currently on the reserve/did not report list.

Bucannon suffered a hyperextended knee, but coach Steve Wilks on Saturday said that an MRI exam revealed no structural damage, per the team's official website. Bucannon is listed as day-to-day.

In his fifth season with the Cardinals, Bucannon was injured Thursday while trying to avoid contact with wide receiver Brice Butler. Bucannon attempted to leap over Butler, but his knee slammed into Butler's helmet.

--Houston Texans running back D'Onta Foreman remains on the physically unable to perform list but his coach is happy with his progress.

Foreman's rookie season was cut short in November when he tore an Achilles tendon. He was placed on the PUP list July 25 while he continues to rehab the injury.

--Offensive lineman Marshal Yanda was activated from the physically unable to perform list by the Baltimore Ravens after passing his physical Saturday.

The veteran guard was placed on the PUP list when training camp started July 16 as he continued to recover from a fractured left ankle and offseason shoulder surgery.

The 33-year-old fractured his left ankle in a Week 2 win over the Cleveland Browns and missed the remainder of last season.

--The Chicago Bears signed one offensive lineman and release another, the team announced Saturday.

Chicago signed Kaleb Johnson and waived Jack Allen. Neither player has seen action in the NFL.

Johnson has spent time on the practice squad of four NFL teams since 2015, most recently with the Kansas City Chiefs, who waived him in mid-June.

Allen, who played collegiately at Michigan State, spent parts of the past two seasons on the roster of the New Orleans Saints.