The NFL released a fact sheet regarding the new helmet rule on Wednesday after several players admitted to being confused this past week.

The league implemented the new rule in late March.

Under the new directive, it is a foul if a player lowers his head to initiate and make contact with the helmet on an opponent. The contact is not limited to an opponent's head or neck area, as initiating contact to a player's torso, hips and lower body is also an infraction.

According to the fact sheet released Wednesday, the penalties for a violation include a loss of 15 yards or ejection, which includes a set of standards. An ejection would be considered if a player lowers his helmet to establish a linear body posture prior to initiating and making contact with the helmet, if he has an unobstructed path to his opponent or if contact clearly is avoidable and player delivering the blow had other options.

"We think this is going to help us take the helmet out of the game, and get it back to where it's a protective device as opposed to something that can be used as a weapon," commissioner Roger Goodell said in March.

NFL // 8 hours ago
NASCAR 3D-prints coronavirus supplies, Patriots' plane flies masks from China
April 2 (UPI) -- NASCAR is using 3D printers and the New England Patriots flew their team plane to China in two of the latest efforts from the sports world to provide supplies to help fight the coronavirus pandemic. 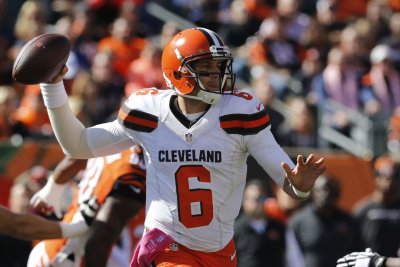