By
Chris Mascaro, The Sports Xchange 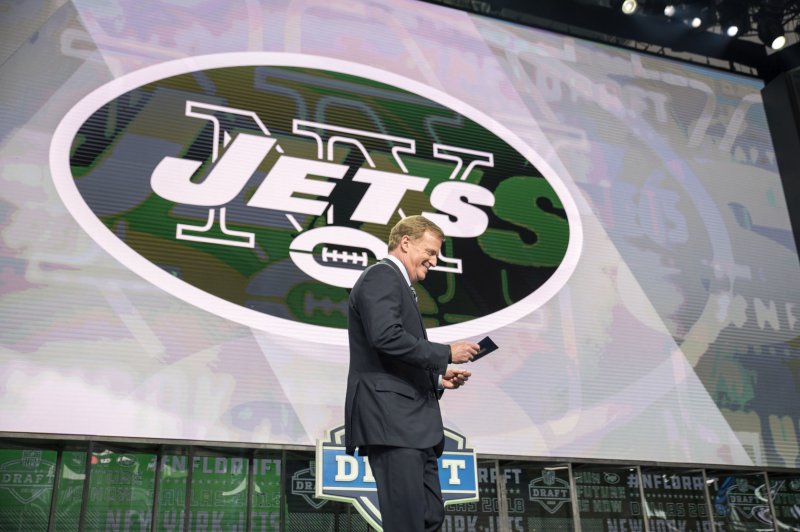 NFL Commissioner Roger Goodell is booed as he takes the stage to announce the New York Jets pick during the 2018 NFL Draft on April 26 at AT&T Stadium in Arlington, Texas. Photo by Sergio Flores/UPI | License Photo

FLORHAM PARK, N.J. -- The New York Jets did their own in-house variation of HBO's Hard Knocks this offseason called One Jets Drive -- the address of their team facility in Florham Park, N.J.

Airing on Facebook a few times over the offseason, it was your standard, narrated behind-the-scenes look at the team and its personalities. You could see what Leonard Williams feeds his dogs or watch Jordan Jenkins go fly fishing, for example. And did you know Steve McLendon planned on taking his kids to the Bahamas this summer?

Though we may poke fun, the series was a good refresher on just how important this offseason will be in shaping the Jets' next few seasons. Remember, if general manager Mike Maccagnan had executed his Plan A for quarterbacks, we'd be talking about Kirk Cousins being able to live up to a massive contract, and rookie savior Sam Darnold might be in Buffalo, Arizona or some other far off NFL outpost.

Alas, we get to Mr. Darnold. What took us so long?

Anyway, the fourth episode opened with the rookies taking a tour of MetLife Stadium. Darnold stepped into the dark locker room first, and when he got to the middle of the room, it illuminated. Light will be shined on his every move from here on out.

Darnold reports to training camp with the rest of the rookie class on Tuesday, with the veterans coming two days later. From there, things move quickly -- an intrasquad scrimmage on Aug. 4 at Rutgers, the preseason opener Aug. 10 against the Falcons and three practices with the Redskins Aug. 12-14 in Richmond, Va., leading to their second preseason game Aug. 16 on a short week.

Darnold has already mastered the Derek Jeter art of saying plenty of words that don't convey much meaning. If you've heard him speak, you surely know he's "excited" -- about everything. But Josh McCown, the 39-year-old veteran who will start training camp as the Jets' No. 1 starter, is on a one-year deal and, at this point, the 15-year veteran can say basically whatever he wants.

"With Sam, we have the right guy," McCown said about his heir apparent. "He loves the game, he asks the right questions and he's willing to work. ... That's the foundation; you have to have that."

But nothing any of Darnold's teammates or coaches say can compare to the pressure-inducing statement owner Chris Johnson made back in May.

"I think people are going to look back 20 years from now and say that this is the moment that the Jets shifted into a new gear and became a great team," Johnson said upon Darnold's drafting. "I think we've got a real future with this kid, and he isn't even 21 yet (he turned 21 in early June). We might have a long time with this young man. I hope so, because right now, I think he really is our future.

"I'm not the GM. I'm not the head coach. But I can recognize a great football player."

Now all he has to do is win a few games against the Patriots and people will say he can walk on water.