Notebook: Beckham could still hold out 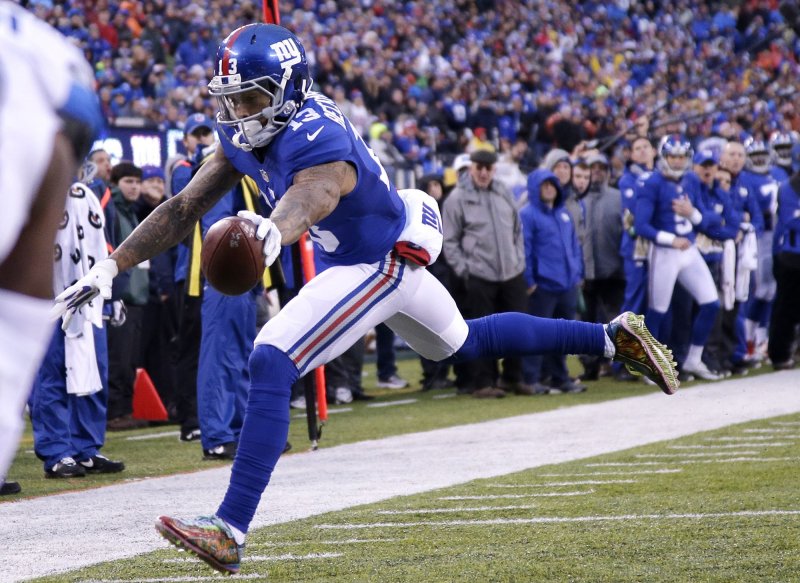 New York Giants wide reciever Odell Beckham Jr. reaches the football over the goal line for a touchdown during a game against the Detroit Lions in 2016. Photo by John Angelillo/UPI | License Photo

Odell Beckham Jr. insisted a week ago that he will be in attendance when the New York Giants open training camp next month, but an SNY report suggests that the mercurial wide receiver could still be a holdout if contract negotiations continue to lag.

Beckham wants a new contract that will make him the highest-paid wideout in the game. He is set to make $8.5 million in 2018 on the fifth-year option of his rookie deal.

Beckham appeared to shut down the notion of a holdout a week ago, telling SNY at his football camp in New Jersey. "No. No holdout." Asked if he will show up when training camp begins July 25, Beckham answered: "Yes sir. Yes you will."

Yet, despite those strong words, the website reported that a holdout is still on the table, citing sources in Beckham's camp.

RELATED Titans RT Conklin may not be ready for opener

Beckham is recovering from a surgically repaired ankle, an injury that limited him to four games last season. The one snag for the team, according to the report, is that officials want to see Beckham healthy and on the field.

--It is not a question of if, but when Drew Brees will break Peyton Manning's NFL records for passing yards and touchdowns.

RELATED Titans RT Conklin may not be ready for opener

Brees, 39, is entering his 18th NFL season. Last year, he threw for 4,334 yards with 23 touchdowns and eight interceptions.

Manning owns NFL records with 71,940 passing yards and 539 TD passes. Brees is behind only Manning with 70,445 passing yards. He trails Manning and Brett Favre (508), and is tied with Tom Brady with 488 touchdown passes.

--Steve Spurrier, the coach of the Orlando entry in the new Alliance for American Football that will begin in February 2019, reached out to fellow former Florida quarterback Tim Tebow to gauge his interest in joining the team.

During an appearance on the Paul Finebaum Show on Friday, Spurrier acknowledged that shortly after he was hired he texted Tebow, the 2007 Heisman Trophy winner as a sophomore at Florida who spent three seasons in the NFL but is currently playing baseball for the New York Mets' affiliate at Double-A Binghamton. He declined the offer from Spurrier.

"He said, 'Coach, I'm gonna keep swinging the bat and see what happens,'" Spurrier said. "I told him we'd have a No. 15 down in Orlando waiting for him."

--Two games into his CFL career, Johnny Manziel has yet to take a regular-season snap.

Manziel watched from the sideline again as the Hamilton Tiger-Cats evened their record at 1-1 with a 38-21 victory over the Edmonton Eskimos on Friday night.

And with the way starting quarterback Jeremiah Masoli played in the victory, it doesn't appear Manziel will have many chances to be under center in the near future.

Masoli finished 19 of 29 with three touchdowns, an interception and 332 yards for the Tiger-Cats.

--Former Western Michigan cornerback Sam Beal will have his pro day Thursday at the school.

Beal is among three players -- all defensive backs -- who are expected to be available for the NFL supplemental draft to be held July 11.

Cornerback Adonis Alexander (Virginia Tech) had his pro day Wednesday, with an estimated 26 NFL teams attending the workout. Mississippi State Brandon Bryant is expected to petition the NFL to enter the supplemental draft.

According to NFLDraftScout.com, Beal and Alexander each flashed length, athleticism and ball-skills throughout their college careers.

--The status of injured Tennessee Titans right tackle Jack Conklin for the 2018 season opener is unclear.

Conklin tore an ACL in January against the New England Patriots. He has attended organized team activities and minicamp but has only been able to walk and observe.

According to the team's website, it is too early to tell if Conklin will be ready for the Titans' season opener at the Miami Dolphins on Sept. 9. If Conklin is ready, it would be only eight months of recovery time, which is considered fast for an ACL tear.

--Kareem Jackson will have a new position in the Houston Texans' secondary.

Texans coach Bill O'Brien told a Houston radio station Friday that Jackson will be shifted from cornerback to safety, per the Houston Chronicle.

Jackson has appeared in 116 games (108 starts) in eight years with Houston -- all at cornerback. O'Brien said Jackson was moved to safety during the offseason program.

The Texans have a need at the position after safety Andre Hall was diagnosed with Hodgkin lymphoma earlier this month. Hall started all 16 games in 2017.

A first-round pick in the 2010 NFL Draft, Jackson is expected to compete for the starting job with rookie Justin Reid, a third-round draft selection. Jackson made 14 starts last season, registering 73 tackles, one interception and 10 pass breakups, which tied for the second highest of his career. He has 14 career interceptions, returning three for touchdowns.

-- Wide receiver Willie Snead got a chance to play with one of the most prolific passers in the NFL during his tenure with the New Orleans Saints.

Still, leaving Drew Brees and the Saints when the team declined to match an offer sheet from the Baltimore Ravens in April was not much of a disappointment for Snead.

"I think it worked out for the best," Snead told the Times-Picayune of New Orleans on landing with the Ravens on a two-year.

Snead was a big contributor in each of his first two seasons in New Orleans, hauling in 69 receptions for 984 yards and three touchdowns in 2015 and following with 72 catches for 895 yards and four scores in 2016. However, he was suspended for the first three games of the 2017 season for violating the league's personal conduct policy and never established a role in the offense, finishing with eight receptions for 92 yards.