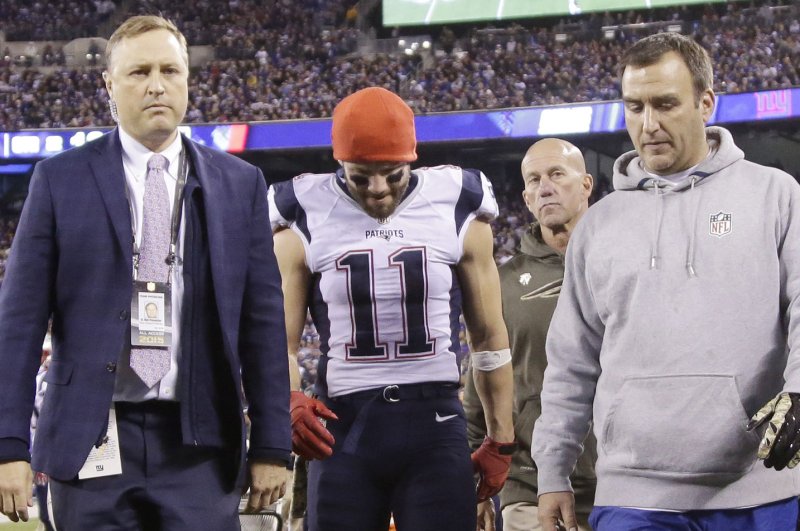 New England Patriots wide receiver Julian Edelman (11) walks off of the field with an injury in the first half against the New York Giants on November 15, 2015 at MetLife Stadium in East Rutherford, New Jersey. File photo by John Angelillo/UPI | License Photo

The NFL is still analyzing the substance that led to the league issuing a suspension of New England Patriots wide receiver Julian Edelman, per a published report.

Albert Breer of Sports Illustrated reported that the substance wasn't "immediately recognizable" and is being analyzed.

Breer declared that the test came in the offseason "a couple months ago." That rules out stimulants, which are included in the substances of abuse policy, separate from the performance-enhancing policy.

"I am very sorry -- I don't know what happened," Edelman wrote on the posting. "I've taken many, many tests obviously over the course of my career, and nothing like this has ever happened. I apologize to the Kraft family, my coaches, teammates and fans.

"As this matter is being appealed, I can't say anymore but no matter what, I will be ready to play and pursue another championship with our team and for Patriots fans around the world."

The 32-year-old Edelman trains with Alex Guerrero, who defended his methods in a statement on Thursday night.

"I've known Julian since his rookie year and he is a phenomenal athlete who takes his training seriously -- it's disappointing to hear today's news," Guerrero said. "Elite athletes sometimes work with multiple coaches and health professionals as part of their training.

"Here at our facility, we take a natural, holistic, appropriate and, above all, legal approach to training and recovery for all of our clients. And anyone who would suggest otherwise is irresponsible, and just plain wrong."

Edelman has been a favorite target of Patriots quarterback Tom Brady when healthy over the last several seasons. He caught 98 passes for a career-high 1,106 yards in 2016.

The Patriots are already thin at wideout after trading Brandin Cooks to the Los Angeles Rams and seeing Danny Amendola sign with the Miami Dolphins in free agency.

New England added Jordan Matthews and Cordarrelle Patterson this offseason and selected Braxton Berrios in the sixth round of the 2018 NFL Draft to join a depth chart that includes Chris Hogan, Phillip Dorsett, Malcolm Mitchell and Kenny Britt.

Mitchell, like Edelman, missed the entire 2017 season and has been limited to conditioning drills during the team's offseason program.