New England Patriots quarterback Tom Brady celebrates a touchdown during the third quarter of Super Bowl LII at U.S. Bank Stadium in Minneapolis, Minnesota on February 4, 2018. The Eagles will be seeking their first title while the Patriots will be after their sixth Super Bowl win. Photo by Brian Kersey/UPI | License Photo

Why? Well, Kraft offered a succinct four-word answer to reporters on Wednesday morning at the owners meeting in Atlanta.

"These are voluntary workouts," Kraft said.

Kraft noted Brady's family responsibilities for his absence. He also said that the three-time NFL Most Valuable Player is "very excited" about the mandatory minicamp, which is scheduled for June 5-7.

Gronkowski's absence from OTAs also wasn't a cause for concern for Kraft.

"I'm pretty sure he'll be there, as well," Kraft said.

Kraft's comments come one day after Patriots coach Bill Belichick was mum with reporters on the absences of Brady and Gronkowski.

"Yeah, I'm not going to talk about the people who aren't here. Guys that are here are improving, they're working hard and those are the guys we're going to focus on," Belichick said.

Brady committed to play the 2018 season during an appearance April 30 at the Milken Institute Global Conference in Santa Monica, Calif. He said at that conference that he desired to spend more time with his family this offseason while still preparing for the 2018 season.

Per the Boston Globe, Brady has been seen training both on the beach and on the field at UCLA. The newspaper also reported that he is expected to invite Patriots wide receiver Julian Edelman and Gronkowski to Montana for additional workouts in July.

Brady threw for a league-best 4,577 yards along with 32 touchdowns and only eight interceptions last season.

Gronkowski initially raised doubts about his playing future mere moments after Super Bowl LII, with rumors circulating of a career in acting, professional wrestling and even dirt-bike riding for the affable star.

A second-round draft pick of the Patriots in 2010, Gronkowski has been a touchdown machine since joining the team, reaching double digits in five of his eight seasons, including a career-high 17 in 2011.

His 76 touchdown catches rank third on the all-time list among tight ends, behind Antonio Gates (114) and Tony Gonzalez (111).

NFL // 12 hours ago
Chiefs fans donate more than $250K to Buffalo children's hospital after playoff win
Jan. 26 (UPI) -- Just days after Kansas City handed the Bills one of the most crushing playoff losses in franchise history, Chiefs fans raised more than $250,000 for the Buffalo community. 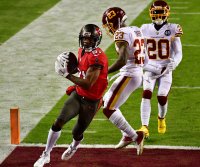 NFL // 2 days ago
Buccaneers' Tom Brady hints at retirement, wants to spend more time with family
Jan. 24 (UPI) -- Tampa Bay Buccaneers star quarterback Tom Brady opened up about his future in the NFL on Monday, indicating that family will play a significant role in determining whether he will retire or play next season.