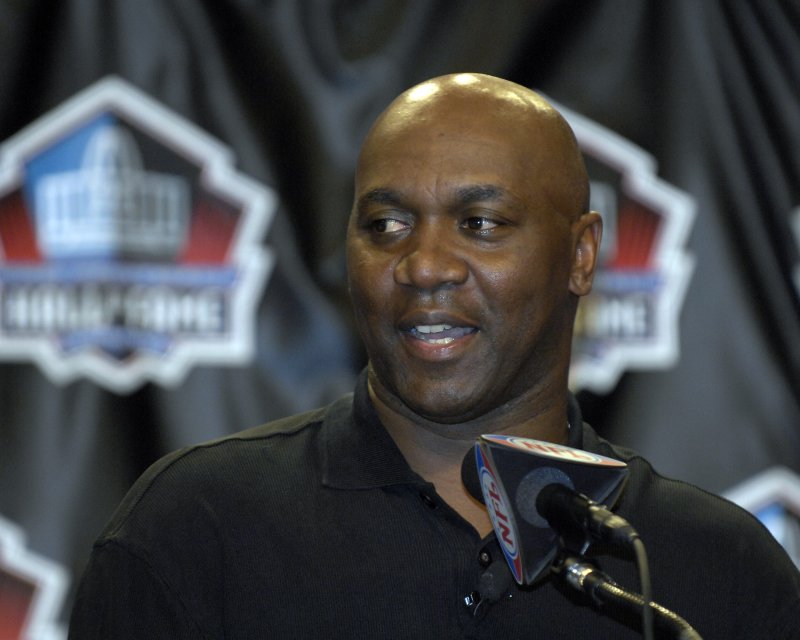 Former Buffalo Bills running back talks to reporters after his induction into the Pro Football Hall of Fame in 2007. File photo by Joe Marino/UPI | License Photo

Pro Football Hall of Fame running back Thurman Thomas will have his No. 34 jersey retired by the Buffalo Bills during the 2018 season, the team announced Wednesday.

Thomas, who played with the Bills from 1988-99, will have the ceremony during halftime of the team's home game against the New England Patriots on Oct. 29.

He joins former teammates Jim Kelly and Bruce Smith as the lone members of the team to have their numbers retired. The Bills retired Kelly's No. 12 in 2001 and Smith's No. 78 five years later.

"It does make it unique knowing that I played with Bruce for 12 years and with Jim for eight years," Thomas told the team's website. "I can remember the things that they did on the football field and why they had their jerseys retired, and now I'm going to be in that same group with those guys. To be in the company of those two players is something special."

"He was an all-purpose back," Kelly said of Thomas, who turned 52 on Wednesday. "He wasn't a guy where he'd go off tackle right and off tackle left and trap right and trap left and that was it. He brought something to the table that defenses weren't prepared for and that was him coming out of the backfield or splitting him out wide. We did some special things with him."

The Bills' all-time leading rusher (12,074 yards), Thomas was the NFL Most Valuable Player in 1991 and a five-time Pro Bowl selection before retiring in 2001. He was inducted into the Pro Football Hall of Fame in 2007.

"He led the league in yards from scrimmage four straight years and it had never been done before, not even by Jim Brown who had held the record with three," former teammate Steve Tasker said. "For certain stretches of his career not only was he the best running back in football, he was the best player at any position in football."