Eagles' Carson Wentz confident he will be ready for Week 1 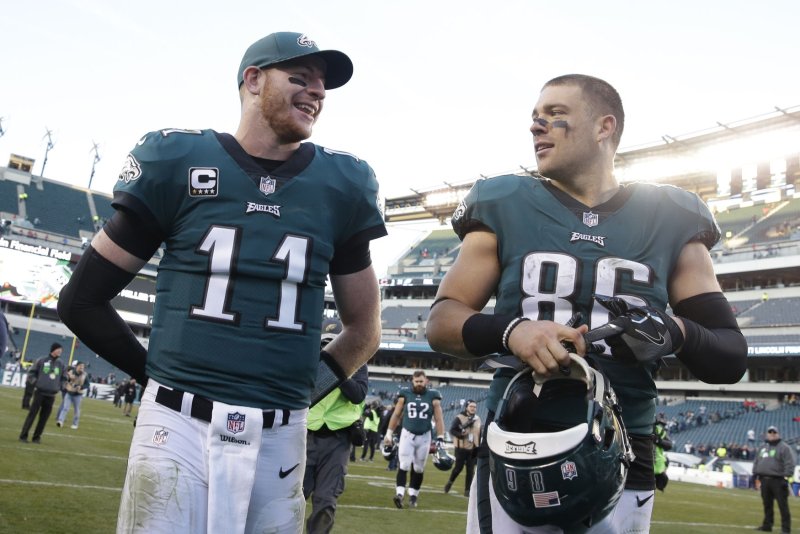 Philadelphia Eagles quarterback Carson Wentz (11) and tight end Zach Ertz (86) smile as they walk off the field after the game against the Chicago Bears in Week 12 of the NFL regular season on November 26, 2017 at Lincoln Financial Field in Philadelphia, Pennsylvania. Photo by John Angelillo/UPI | License Photo

Philadelphia Eagles quarterback Carson Wentz is keeping the season opener as a realistic target date for his return from a torn ACL and LCL.

"Rehab has been great. Obviously, it's not fun. It's quite the process. It can be painful some days," Wentz said Monday on NFL Network's Good Morning Football. "But so far everything is going well. Where I'm at I'm very confident. My goal is to be ready Week 1."

Wentz also admitted that he's aware of the criticism that he takes too many hits, but said he won't completely alter the way he plays the game.

"As far as changing as a player, there's just things that I'll continue to learn through my whole career," the 25-year-old said. "There's times when you look back on the tape and maybe I should have avoided that [hit], know when to cut your losses.

"But overall, as an aggressive player, I'm not going to change, so to speak. I'm not going to let this slow me down going forward. I truly believe I'll come back stronger than ever. Especially having to miss the playoffs, miss the Super Bowl. As exciting as it was, there was just that little uneasiness inside of me to have to miss those games. I truly believe I'll be back stronger than ever and I'm not too worried about it going forward."

Wentz, who sustained his injuries in a game versus the Los Angeles Rams in December, aims to be ready as the Eagles begin defense of their Super Bowl title against the Atlanta Falcons on Sept. 6.

"I'm very confident," Wentz said of being ready to face the Falcons. "It's a fluid process, so you never know how it's going to go, but where we're at, just trying to do what the doctors say and just take it step by step. There are times when you feel great and want to push it more, but you've got to stay the course with what the doctors are saying. I feel really good and really confident for Week 1."

RELATED Philadelphia Eagles' Carson Wentz on mend, not about to change style

Wentz was considered the front-runner for league Most Valuable Player honors before the injury and had to watch backup Nick Foles guide the Eagles to a 41-33 win over the New England Patriots in Super Bowl LII. Foles also won Super Bowl MVP honors to boot.

Wentz threw for 33 touchdowns in 2017 to move past Sonny Jurgensen for the most in a single season in franchise history, a record that stood since 1961. Wentz completed 60.2 percent of his passes for 3,296 yards with just seven interceptions in 13 games in 2017.

For his two-year career, he has 49 touchdown passes and 21 interceptions.