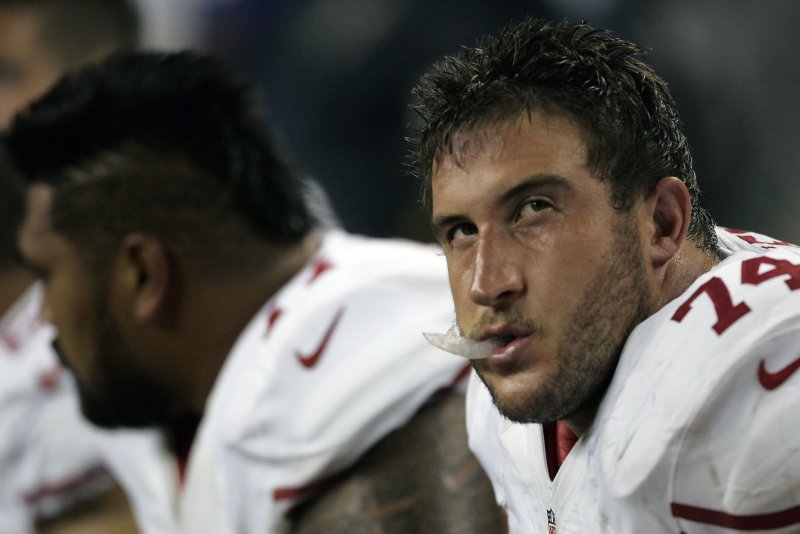 San Francisco 49ers offensive tackle Joe Staley (74) waits for the offense to take the field against the Seattle Seahawks during the fourth quarter on September 15, 2013 at CenturyLink Field in Seattle, Washington. File photo by Jim Bryant/UPI | License Photo

The San Francisco 49ers had a simple reason for taking offensive tackle Mike McGlinchey with their top pick in this year's NFL Draft.

The 49ers already have a premier left tackle in veteran Joe Staley, a six-time Pro Bowl selection who has started every game in seven of his 11 NFL seasons.

In taking McGlinchey with the No. 9 overall pick, San Francisco envisioned a perfect bookend for Staley -- and his eventual successor at the position due to similar traits.

Perhaps the biggest commonality between the two is toughness. McGlinchey started all 25 games over his final two seasons at Notre Dame despite a broken hand and never missed a practice.

"I'm sure he has some injuries, but we haven't seen it because he doesn't talk about them, and he just plays," 49ers head coach Kyle Shanahan said of McGlinchey, per the San Francisco Chronicle. "He's a guy who shows up every practice, every week and that's truly what we believe an O-lineman should do."

San Francisco is used to such consistency from Staley, who missed only four games over the past seven seasons and returned after a one-week absence last season despite sustaining a fractured orbital socket.

The 49ers rewarded Staley with a new deal this offseason that will give him a raise of $6.5 million over the next two seasons. They also traded right offensive tackle Trent Brown to the New England Patriots one day after scooping up McGlinchey.

General Manager John Lynch told the Chronicle that concerns over Brown's level of commitment factored into the decision on how to fortify the offensive line.

"Is this a guy [Brown] that we're going to want to pay the next contract to?" Lynch asked. "Along those same lines, we talked at great length about what we appreciated about Mike McGlinchey."

Staley and McGlinchey both played for current Notre Dame head coach Brian Kelly in college. Kelly converted Staley to offensive tackle from tight end at Central Michigan, and some holdovers from that coaching staff made a point of using Staley as an example for McGlinchey to pattern his game after while at Notre Dame.

"I've studied [Staley] for a long time on top of admiring him from afar," said McGlinchey. "It's going to be an unbelievable opportunity to play across from Joe."

Lynch said McGlinchey is "made of the right stuff both on and off the field" while citing his "off-the-charts" presence, character and commitment after drafting the first-team All-American.

"We talk a lot about guys who represent what it takes to win games, to win championships," said Lynch. "We feel like he's got a lot of that in him."