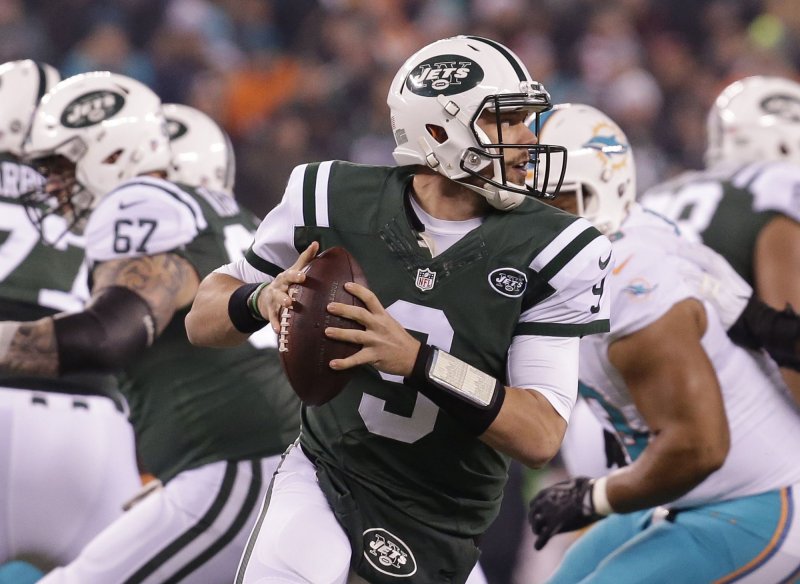 New York Jets quarterback Bryce Petty looks for a receiver during a game against the Miami Dolphins in December 2016. Photo by John Angelillo/UPI | License Photo

New York reportedly attempted to trade Petty this offseason but did not find a suitor.

Petty appeared in 10 games since he was selected by the Jets in the fourth round of the 2015 NFL Draft. He completed just 53.1 percent of his pass attempts and had four touchdowns and 10 interceptions.

The 26-year-old was pressed into action late last season after McCown sustained a season-ending hand injury. He lost all three games to drop his career record to 1-6 as a starter.

General manager Mike Maccagnan indicated on Wednesday that Darnold will compete with McCown for the starting quarterback job this season.

Maccagnan was appearing on the Rick Eisen Show on NFL Now and after an early discussion about the Jets' plans for Darnold, Eisen asked point-blank if the former USC star would be given a chance to be the opening game starter.

"Nothing's been predetermined one way or another," Maccagnan said. "There's a chance for anything on the table. Nothing's been sort of set in stone in terms of how we're going to do this in terms of a firm time frame.

"But he's going to have every opportunity and we'll see how it develops going forward."